Baghdad Barb, no longer content to support things Trump makes up, starts making up her own stuff 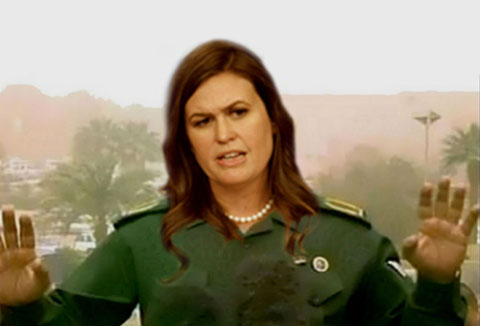 SANDERS: “One of the worst cases was the reporting on the U.S. ability to listen to Osama bin Laden’s satellite phone in the late ’90s. Because of that reporting, he stopped using that phone and the country lost valuable intelligence.”

First of all, that never happened at all. “The claim has been scrutinized since 2005, when it was publicly made by President George W. Bush, with his press team fingering an Aug. 21, 1998, article in the Washington Times as the reason bin Laden stopped using the phone.” The Washington Times wrote about bin Laden’s satellite phone in August of 1998, and bin Laden continued to use the phone through October. Moreover, other news outlets had reported that story dating back as far as 1996, and in no case did the stories consist of anything more than “bin Laden stays in contact with the world via satellite phones,” which was obvious before it appeared in newsprint since he was giving interviews via satellite phones in that period.   (The Times article never even mentioned the possibility that those phones were being monitored by the West, although the L.A. Times did mention that in September – after which bin Laden continued to use the same phone anyway!)

Second of all, in her attempts to discredit the mainstream press, Sanders was referring to an example of 1998 reporting by the right-wing Moonie paper, the Washington Times. Here’s what the Columbia Journalism Review wrote about that paper’s performance in that period under Wed Pruden’s editorship (1992-2008): “A forum for the racialist hard right, including white nationalists, neo-Confederates, and anti-immigrant scare mongers.” So that paper was not exactly what most people would call mainstream journalism.

(But again, even though they may have been the preferred news source for far-right lunatics, they did nothing wrong in that particular story, and their story did not have the purported negative effect.)

In other words, Sanders’ criticism was equivalent to making a false claim about the impact of a story reported by Sean Hannity, and then using that as an example of how the mainstream media outlets act irresponsibly!