If you thought they were going to cut back on the nudity, think again. They doubled down. Some of the nudity is quite indelicate!

Here is a gallery of Bronn with three prostitutes, played by Josephine Gillan, Lucy Aarden and Marina Lawrence-Mahrra.

Is it Demi? Your guess is as good as mine, and I don’t even have one!

Maisie Williams: behind the scenes for Super magazine, April, 2019

There’s an article in today’s WaPo about Fleetwood Walker, a black man who played in the major leagues before Jackie Robinson, albeit in the 19th century.

I’m glad to see Fleet get the recognition he deserved, but I’m not even going to link to the WaPo article because it is basically wrong about everything. (Could Trump be right about “fake news”? I hope WaPo’s contributors know more about politics than they know about baseball.)

1) Fleetwood Walker wasn’t the first black man to play in the majors, although he was the first regular, as far as we know. The first one we are currently aware of was a star Brown University player named William Edward White, who played one game on June 21, 1879 when called into emergency service by an injury affecting the crosstown National League team, the Providence Grays. He had a single in four at-bats, two stolen bases, scored a run, and played errorless ball at first base, recording 12 putouts.

One of the very cool things about William Edward White is that he looks like a time-traveling Barack Obama! 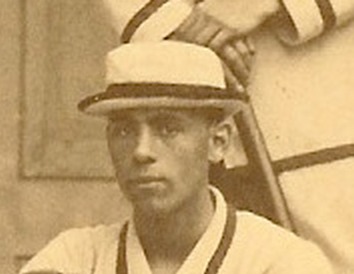 2) Jackie Robinson wasn’t the first black man to play in the modern game, and therefore did not break the modern “color” barrier. His specific achievement was that he was the first African-American man to play in the 20th century. In 1944, however, three years before Robinson’s debut, an African-Cuban man named Tomas de la Cruz slipped under the radar as a regular starting pitcher for the Cincinnati Reds. (De la Cruz’s achievement is doubly impressive, because he wasn’t even playing in a friendly home town. Cincinnati is just about a southern city, with suburbs in Kentucky! One must wince to think of the problems he must have endured.)

With WW2 raging, the majors were so desperate for players in 1944 that “Tommy” was barely noticed. Although he pitched respectably (9-9, 3.25 ERA), he was no longer on the roster once the first white guys started drifting back from the war. In an odd coincidence, de la Cruz also wore #42, the number Robinson would make famous.

3) De la Cruz was obviously a black guy, but even before him came at least three Latin-American players of mixed descent (some African included) who slipped under the racial radar: Roberto Estalella, Alex Carrasquel, and Hiram Bithorn.

4) Hi Bithorn also owns a claim to another bit of historical importance. He was the first Puerto Rican to play in MLB, and should also be called the first Puerto Rican star, easily preceding Vic Power and Roberto Clemente, because in 1943 he won 18 games for the Cubs and led the National League in shutouts. (Clemente was 9 years old at the time.)

His fifth green jacket was his first in 14 years, and his first major victory in nearly 11 years. Woods became the oldest Masters winner since Jack Nicklaus in 1986.

The bookies got killed on this. They set the odds quite high, and people love to bet on Tiger. As ESPN wrote, “Some bookmakers, from Nevada to New Jersey, didn’t believe Tiger Woods would win the Masters. It was an expensive miscalculation.”

And sort of related: Genie’s booty in a different swimsuit

And one more booty shot in a third suit

The real name of Smackdown’s Mandy Rose is Amanda Saccomanno

The Danish model has an interesting backstory. Her backSIDE is not bad either.

Per Wikipedia: “Her mother is a lesbian and her father is gay.”

In the words of ol’ Billy Shakespeare, “How beauteous mankind is! O brave new world that has such people in’t!” Today’s world is indeed very different from, and much more complicated than, the one I grew up in.

She’s wearing a tiny thong, so she appears to be bottomless in some frames

Per the comments: “It’s from her new music video.”

Not to mention a bikini

The colorizer did a pretty solid job. I like ’em better in color. These pics now have a lot more life in them, so Kelly looks warmer and sexier.

Dawn Olivieri in a 2012 episode of House of Lies. She was one of the best things about that show, as she was always drop-dead sexy as the evil ex-wife.

Ursula did so many beautiful nude scenes that it’s difficult to remember which was which. This one is from Perfect Friday (1970).

There is a gallery of Blu-Ray collages by Oz, our own master encyclopedist, here.

Ursula’s nudity career was kind of unusual in that it occurred fairly late in her life. She could not really get an early start because she was born in 1936, and there was very little nudity in movies before 1964. She was 29 when her first nude scene (Les Tribulations d’un chinois en Chine) was released, but once she got started, she seemed to go on forever. She was still getting naked in several films in the late 70s, when she was in her 40s, and she looked exactly the same as she did in her twenties.

Today? Well, here is a mini-documentary called “Ursula Andress | Transformation From Teenager To 81 Years old.” That should answer all your Andress-related questions.

She has an impressive portfolio. Here is her Wikipedia page.

Here is the entire spread.