Did they actually field the first team against the Dodgers, or were those some people they recruited from the stands?

Oh, well. Long flight, little rest, two best starters not available. That’s not a good concatenation of circumstances. The team had no hitting, and no relief pitching, and Howie Kendrick picked a bad time to show off the wacky Dick Stuart impersonation that always leaves the clubhouse in stitches.

I’m guessing the Nationals must use Bill Buckner as a special first base coach.

What can ya say? As Scarlet O’Hara declaimed, “After all, tomorrow is another day.”

(Actually, Corbin did fine under pressure in the starter role. He was the only bright spot. But you can’t win a game when you score no runs.)

Meanwhile that Atlanta-St Louis game was pretty soporific for seven innings – but the last two were pretty wild!

“Atlanta has lost nine straight playoff series and is just one away from tying the Chicago Cubs’ record for postseason futility — 10 postseason losses in a row between 1908 and 2003. Atlanta has not won a postseason series since 2001, and hasn’t even led a series since going up 2-1 on San Francisco in the 2002 NLDS. The Giants won the next two games to advance.”

I had not really noticed that. 2001? That’s a lot of years. I can still remember the previous decade when they were the favorites to win every post-season series, thanks to having three Hall of Fame pitchers in the rotation.

Now THIS is a good talk show guest. Suck it, Neil deGrasse Tyson!

“But Scoop, did she actually do any talking?”

And a very generous booty it is (.gif)

Even people who study conspiracy theories are baffled by this one. Trump seems to have taken the core of a totally preposterous “flat earth” sort of theory and added even more far-fetched details that he just made up on his own

“I do this for a living, and I’d never heard anyone say the servers were in Ukraine.”

And with good reason. Why would they be? That entire idea makes no sense at all. If you wanted to hide activity that took place on a server, you wouldn’t ship it intact to another location, thus taking a chance that somebody could intercept it, or find it later. You would scrub it, shatter it to pieces or incinerate it, then dump any remaining traces of it into the Pacific, over the deepest part of the Mariana Trench.

The servers do seem to a have a virtual life somewhere. Before CrowdStrike could repurpose the DNC servers and get the organization back online safely, they made a digital image of everything and shipped that evidence to the FBI. I don’t know if that record is still intact somewhere.

Another bizarre detail Trump seems to have concocted is the idea that CrowdStrike “was owned by a very rich Ukrainian.” Nobody can figure out where he even got that idea. One of CrowdStrike’s co-founders, Dimitri Alperovitch, has an Eastern European name, but his family fled from the Soviet Union when he was a child, and they fled Russia, not Ukraine. He was born in Moscow to Russian parents, although even that is irrelevant because, like me, he’s totally American except for his name. He grew up in Chattanooga and took his higher education in Georgia. He looks and talks like your friendly, awkward, slightly doughy uncle. If you are picturing some sinister Bond villain, well, you have it back-asswards. (See for yourself). Could Trump have based his entire wacky scenario on the fact that one smart, avuncular guy has a Slavic-sounding last name? That is bizarre even by his own deviant standard.

The third pic of the Little Mix singer is the most obvious:

A .gif of Madalina in a movie called Youth.

What a beauty! This made our list of the top nude scenes of 2015, but the Romanian model/actress has languished in relative obscurity, despite her exceptional beauty. She kinda disappeared for a while into social activism and child bearing, then reappeared in a tiny role in an obscure 2018 film (114 votes at IMDb) called All You Ever Wished For.

I don’t know what she’s up to now, but here’s her poorly constructed home page if you want to figure it out. (I was going to read her blog, but that link seemed to go nowhere.)

“China should start an investigation into the Bidens”

That’s what Trump told reporters as he left the White House to travel to Florida. That came just moments after he said of China:

“If they don’t do what we want, we have tremendous power.”

I can’t imagine why China would want to help Trump get elected. If they ever got involved, it would probably be to help his opponent. It seems to me that they would prefer any sensible person to Mr. Tariff War.

Damn, it’s difficult to keep up with all of Trump’s shenanigans. In that sense, he’s the Bella Thorne of politicians. Yesterday Trump said Adam Schiff was not worthy to carry Mike Pompeo’s “blankstrap.” Get it? ____strap.

He definitely saw this episode, as noted by Jimmy Kimmel:

Volker also revealed that Bill Taylor, former ambassador to Ukraine and now the chargé d’affaires for Ukraine, texted, “I think it’s crazy to withhold security assistance for help with a political campaign.” 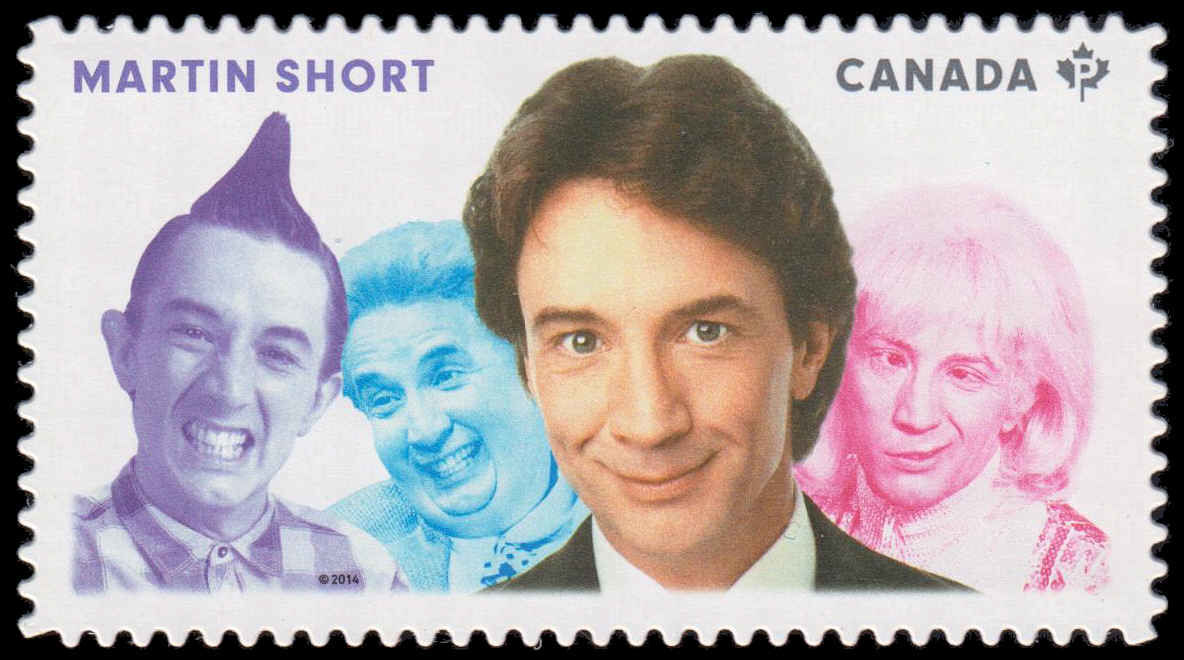 Man, we should put living people on U.S. stamps. I’d like to see a handsome/ugly Americans series. One stamp would include The Hoff and Martin Van Buren. The one above was part of a series on great “humoristes Canadiens,” which also included Jim Carrey, Catherine O’Hara, Mike Myers, and some Canadian dude who actually chose to stay in Canada, thus avoiding human audiences, choosing instead to entertain polar bears with his wacky hijinks.

My dad’s favorite dumb stamp was this one, featuring the two greatest figures in modern music:

“The first thing I always do with a new phone is go into the settings and uncheck the Turn Me Gay option.”

Damn! I didn’t know it was built-in to the phone’s options. I purchased the app from the Apple Store, after I got a sudden urge to blow Jack Lord.

Now, you tell me I could have done it for free, and one of my so-called friends tells me that Jack Lord has passed away.

He said that right out of the blue.

Without softening the blow.

Where are all my night owls??? 🙋🏻‍♀️🦉 @nialynncollection

Lovely. HQ. Close, but no nipple.

Micucci topless in the Easy series

Jessica Boehrs in Eurotrip (2004), a lightly regarded comedy that I love

The Rays lead-off hitter blasted a homer to start the game, and things never got better for the Oakland A’s because Tampa added three more dingers.

The Yankees and Twins will now square off in a match-up of 100-game winners, while Tampa Bay will go on to challenge the mighty Astros, who posted one of the highest regular season win totals in baseball history (107).

Four teams have won more than 110 games in the regular season, but produced mediocre results in the post-season. The two at the top of the list failed to come home with the rings.