This story is really getting complicated. These are the same two guys we read about Monday when they refused to testify or be deposed in the impeachment investigation. Shortly thereafter, they were fleeing the country.

Pictured in the photo: the two suspected criminals. 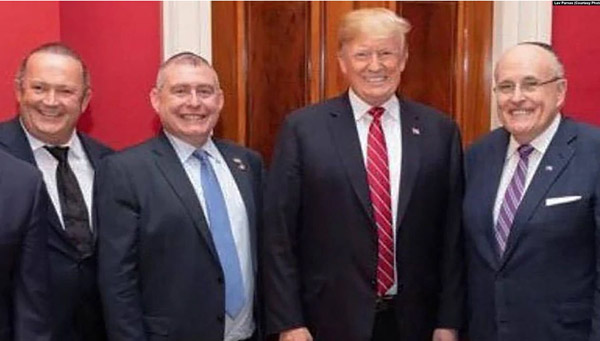 Allegedly, these are two unrelated cases. Congress wanted them to testify about the Ukrainian Bidengate scandal, while the feds arrested them for laundering money to make illegal campaign contributions. (Illegal because they were channeling money from foreign donors into American elections to support Trump and others.) I have a feeling things may tie together when all the curtains are pulled back. At the moment it is not clear whether they were fleeing the country to avoid the expected Congressional subpoenas, or because they knew the feds were closing in on the criminal charges.

I wonder if Rudy will still go ahead with his Vienna trip, just to pretend that he was telling the truth about that completely different reason. Probably not. One thing about Rudy – he doesn’t spend a lot of time trying to construct plausible lies. He just wings it.

Here’s another kicker, hot off the presses: Giuliani was not only using these two guys in his crusade to dig up dirt in Ukraine, but he also accepted hundreds of thousands of dollars from them for consulting and legal services!

These guys are tight!

at least there’s no video pic.twitter.com/JVaUyJpm4V