I originally had written below that the forgotten Theron topless scene came from the Academy screener of Cider House Rules. That’s how I remembered it. (I did that collage myself, way back in 2000.) Back in those days, I never did film clips from VHS tapes. In fact, there were very few film clips on the internet in general in that era, because most people had dial-up connections. I figured I should make one now, since the scene is totally unique and exists nowhere else in the world, to my knowledge. Since I no longer have the original source, I found a copy of the “for your consideration” screener on eBay for six bucks and bought it.

Bad news. I was wrong.

That screener just had the same censored version of the scene that can be found on the DVD, Blu-Ray and the commercial VHS. Now I am racking my brain to figure out how I ever found that version of the scene. If not from the screener, where the hell did it come from? It had to be something that existed back in 1999 or 2000, because that’s when I made that collage.

I went back though the 2000 editions of the Fun House. Our commentary at the time said it was made from a cam of a theatrical projection. My collages appeared on the page from March 27, 2000, and a single frame (from somebody else, I think) appeared on March 12. But where was this version projected? I didn’t know until today, when this comment appeared:

“The topless version of the Cider House Rules scene was in the version that was shown at the Toronto Film Festival in September 1999. It was subsequently re-edited to achieve a PG-13 rating for its theatrical release. To my knowledge, there was only a single print struck with the full scene so, somehow, you have footage from it. It was likely made internally at the studio or at the festival. It likely no longer exists except possibly in a private collection.”

The frames are apparently from a “cam,” so somebody must have made a bootleg cam recording at the Toronto screening, and I somehow stumbled over it, probably on an IRC channel on the Undernet.

If you follow this page and others dedicated to film nudity, you have certainly seen some lovely captures of Charlize Theron’s butt in The Cider House Rules.

But what you may not realize (unless you are a member at the Fun House) is that there was an earlier version of this scene which included lengthy topless exposure. To my knowledge, this variation has never appeared as “deleted footage” or “alternate footage” on any DVD or Blu-Ray. It is one of the rarest items in my collection. The quality is not good. 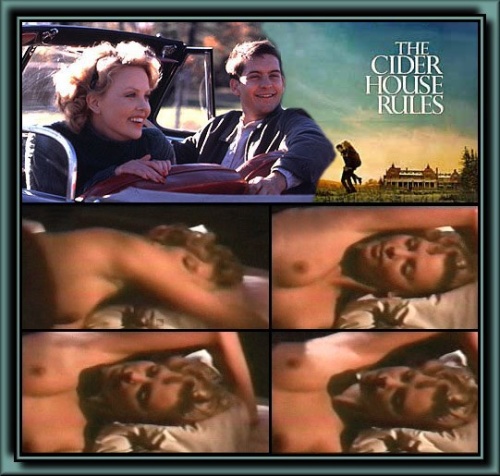