The collages and notes from Fuzz appeared here previously. The remainder of the entries are new.

Once again Brainscan takes a deep dive into a forgotten chapter in the history of film nudity: the grindhouse era. Except for Scoop’s intro immediately below, Brainscan alone created all the commentary and collages, as well as the myriad of film clips that accompany this article in the members’ version of the Fun House.

The approach of the 70s sounded the death knell for a grindhouse industry pressured from all sides.

As legal restrictions on complete nudity in movies decreased and pressure to reveal anything and everything increased, grindhouse directors pushed the envelope of what they would film. Some movies in the short period of 1969 to 1972 do a nice job of showing just how far these movies would go.

Maria Arnold is in a pair of sport-humping scenes, one indoor and the other out in the sun.

Maria and Neola and Uschi sit around a fire toasting marshmallows – that is not a euphemism for a libidinous act – and then cheer on John Holmes as he pretends to do the double-backed monster with some other woman.

One highlight of the movie has Neola and Uschi getting very friendly with one another.

Story goes the two actresses really were friends, and they appeared together in what seems to be a dozen movies.  Neola was only 18 or 19 years old at this time; she seemed to know what guys wanted to see and she seemed to have no problem at all giving it to them.

The other highlight has Uschi and John Holmes pairing up for a session of softcore coupling.

Eye Spy (1971) had the story, acting and production qualities of a hardcore film but none of the hardcore activity.  It stars Donna Stanley and Pamala Westcott, both of whom were very attractive and both of whom would try her hand at hardcore movie making for a very brief time.  The thinnest of stories has a guy installing hidden video equipment around a house so that its owner could spy on the comings and goings of his daughter.  Or  something like that.

How I Got My Mink (1969) starred Donna Stanley, who would turn to hardcore movies, and Monica Gayle, who often played the girl next door turned wicked. There is not much to say about the movie except it is a hippie ode to free love, self-love and girls will be girls love.

Ms. Stanley has a most revealing set of performances with:

a guy in a van

another guy playing a doctor

Ms. Gayle also jumps right into the act, as director Nick Millard appeared to have a Tinto Brass-level attachment to naked bottoms.

A scene with a pair of uncredited actresses – one of whom looks like Cathy Adams – completes the whole thing.

as a couple of bi-curious women who spend a lot of time together.  Ms. Mills’ character seems more firmly decided in her choice of bed partners, whereas Ms. York explores the company of a hairy male who appears to be some sort of primate.  I know how most readers of the Funhouse will respond, but I have to ask this question: if you had the choice of the elegant beauty of Barbara Mills or the hirsute form of her male companion, which would you choose?  By the end of the movie, Ms. York comes to her senses and moves back to Barbara.

None of these movies started with the best production values and all have suffered some damage with time, but the worst-off, by far, is The Adventures of Flash Beaver (1972).

Linda York is in this one, too,

but the star is Alice Friedland (sometimes spelled Friedlund).

She plays a super-heroine named Flash Beaver, yes indeed, whose super-powers include the ability to move from place to place at the speed of light, disrobe instantly and educate a couple in the ways of love.  The result is pretty much what you would expect.  I am a fan of both women, but this movie is really poor in every way that can be measured.

Five Loose Women (1974) is an escaped women-in-prison movie, which I suppose makes it a women out of prison movie.  There is this and that and the other thing that goes on, but the highlight of the whole shebang is when escapees meet hippies.

play the hippie gals whereas four of the five escapees – on the loose and therefore Loose Women (wink, wink, nudge, nudge) – are played by

Eve, Maria and Janet do what hippies do by running around and dancing, all the while topless.  When the loose women find the hippie encampment, they borrow clothes from the residents and change out of prison garb. The result, in glorious broad daylight, is Donna (ever so briefly) and the other women topless. That’s about it for exposure, despite the fact two of the women playing hippies (Eve and Maria) and one of them playing an escapee (Rene) spent considerable time doing hardcore movies.

Five Loose Women has the look and feel, not of a grindhouse movie that was intended for a rundown theater in the low-rent district but of a drive-in theater that catered to couples busy with other pursuits. As Scoop said in his comments about grindhouse cinema, drive- in theaters were places for sexploitation fare, but they showed hicksploitation movies and costume comedies rather than the porn-without-penetration films that kept grind houses busy for a while in the 70’s.  Five Loose Women fits into that drive-in genre.

The drive-ins would outlast the grind houses.  You could still go a drive-in theater and see some impressive nudity in the mid-70’s and even into the early 80’s – I remember seeing Lifeforce at a drive-in when it first came out in 1985.  But video killed the grindhouse star and it also finished off the drive-ins by the end of the 80’s.

The replacement for grind houses and drive-ins would be the kind of direct-to-video movies that made Shannon Tweed famous, or at least respectably rich in 90’s, and it was followed by all sorts of cable series in the first decade of this century.  But all of that has come to an end and it is impossible to imagine what could bring any of it back.

Part 1 of this series, The Immoral Mr. Teas, can be found here

Part 4, The First Nudie Musical, can be found here

Part 6, The Mid Sixties, can be found here

Part 8, The Turn of the Decade, can be found here.

Part 9, The First Nudie Sketch Comedy, can be found here.

If you enjoy Brainscan’s work, here are the other series that can be found on Other Crap:

The Films of Harry Novak

Part 1, The Sixties, can be found here.

Part 3, The Seventies, is here.

Part 4, The Models in Print (and in his films), is here

The Early Years of Film Nudity

The same articles, with the added bonus of all of Brainscan’s film clips,  can be found in the members’s version of the Fun House, along with the many thousands of other collages, clips and commentaries that Brainscan has created in the past two decades. (And his contributions represent only a tiny fraction of the content in the back issues, since the Fun House has been updated every day, seven days a week, without exception, for the past 24 years.)

Mishel Prada in a recent episode of Vida

Jessica Szohr is hot. She plays the chief of security on The Orville.

I have not seen this before. It seems that panties were not her thing.

Always worth another look

Lots of rear views as Lady MacBeth (2016), plus breasts from Marcella (episode two)

Jodie Comer in an episode of Silent Witness

Although it’s a shame Rip Taylor is dead.

He’s only faked his own death once? Small-timer. Hell, I once faked my own death to avoid going to a Celine Dion show.

What about the woman who was to be my date for that show? She still places flowers every year on my fake grave. Good thing she doesn’t read other Crap.

Some good investigative follow-up by the NY Times, but the FCC still has room to appeal. You KNOW there’s a good reason why the FCC is hiding this data so fervently.

This is the finale of Kingsman, when Hanna presents her rear door as a reward to our hero for saving the world. It happened quickly in the movie’s pace, but this particular clip comes with a slo-mo enlargement, and a pretty good look at the fun stuff.

Nothing is hidden in this see-thru. The song is Coffee: 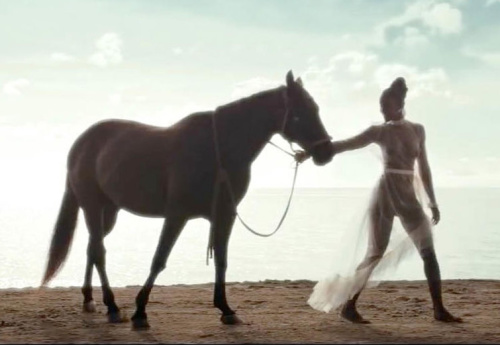 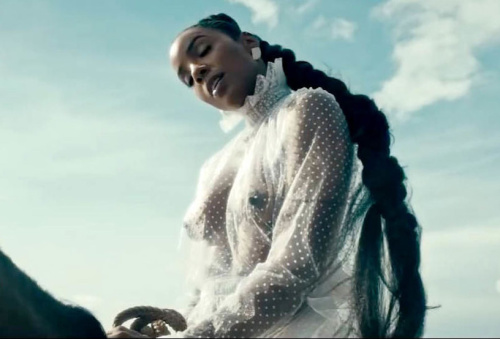 She’s wearing a flesh-tone bikini and working on a scene of her singing (I suppose) in the rain, except that the rain is an artificial deluge created in a studio.

The alleged leak is actually just one breast in one picture. “Tiril Kampenhaug Eckhoff (born 21 May 1990) is a Norwegian biathlete”

I know who Halsey is, and I think she’s really cute in a Selma Blair kind of way. The rest of that headline is a total mystery to me.

It just dawned on me that she’s getting close to the “usual shenanigans” club.

That “skin-tight” is no exaggeration. That outfit doesn’t hide much.