There were 209,000 new cases reported across the globe, almost identical to Thursday’s total. The following list includes all countries with at least six million people and at least 100 new cases per million on Friday.

Although the number of infections was about 20% higher than last Friday, the number of fatalities stayed about the same. This is a list of all countries with at least six million people and at least three Friday deaths per million people. All are in Latin America. The top five has consisted of the same countries for four consecutive days, albeit in a different order each day.

There were 55,000 new cases, the Friday record and the second-highest in history. It was the 23rd consecutive day in which the total number of new cases was higher than the same day on the previous week. The positive test rate was 8.0%.

A record 23 states suffered more than 100 new cases per million population, meaning that any one of them, had they been a separate country, would have been among the top ten in the world. TWELVE states topped the new infection rate of ANY country in the world. Here is that list for Friday:

Arizona tripled the rate of the highest country in the world. Florida doubled it.

The table below shows the USA’s daily COVID cases in thousands. Increases over the previous week are highlighted in red.

Eight states reported at least three fatalities per million population on Friday, a level achieved worldwide by only eight major countries, all of which are in Latin America.

That means that several states are truly in crisis, in that they are comparable to the worst countries in the world in both new cases and new deaths: Louisiana, Arizona, Mississippi and Florida.

The table below shows the USA’s daily COVID fatalities. Increases over the previous week are highlighted in red.

ADDED 7/2: Herman Cain, who contended for the Republican presidential nomination in 2012, has been hospitalized with covid-19 less than two weeks after attending President Trump’s campaign rally in Tulsa.

ADDED 7/2: This can’t be good. “The novel coronavirus is showing some signs of mutating in a way that may make it easier for the pathogen to spread”

Two trends were ominous in June. The following graphs tell a clear story of what great work we did in chipping away at the infection rate and the overburdened hospitals when we were sheltering in place, and how we undid all the good we had done by carelessness over the Memorial Day weekend. That weekend was May 29-31. The incubation period for COVID is said to be 14 days, which means it should have started to show its impact June 12-14. That is precisely what happened. After a steady decline in COVID hospitalizations through June 15, the rate has soared steadily upward ever since. The trend could not be clearer: 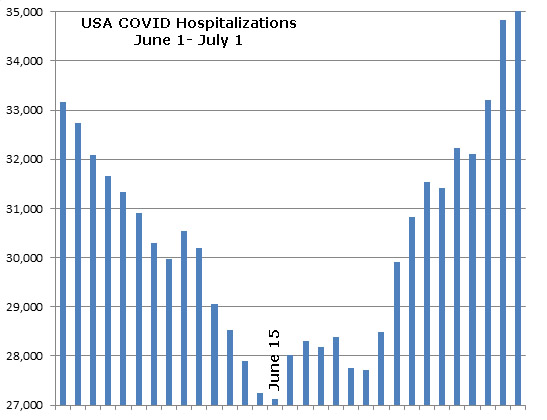 Similarly, we had driven the positive testing rate down to 4% on June 12, and it has been soaring ever since. 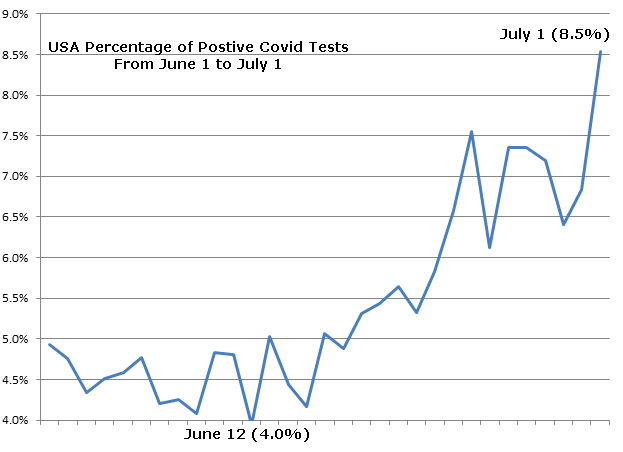 The source of the data is here.

These trends portend that the 4th of July holiday could spell additional bleak consequences for the nation. “In 45 (!!) states, seven-day averages of new infections are higher than they were a week ago, according to a Post analysis, and health officials are nervously eyeing the July Fourth holiday amid the surge. Some beaches, including in South Florida, Texas and Los Angeles, have been closed for the weekend.” 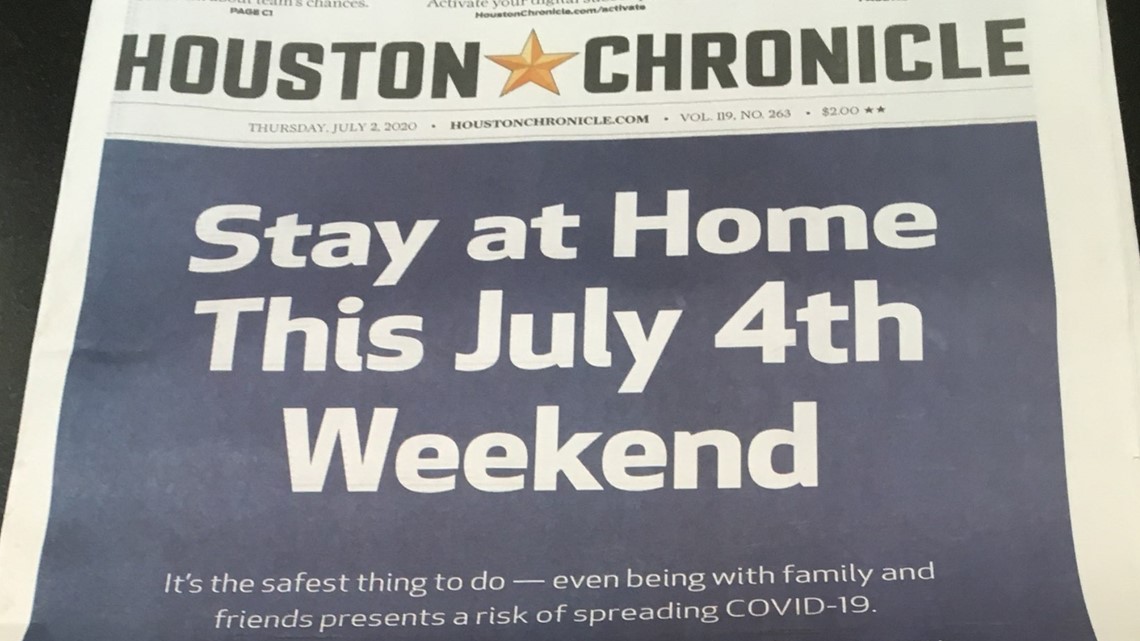 ADDED 7/1: COVID deaths in the USA may be 30% higher than reported. “In the first 3 months of the US coronavirus epidemic, the number of excess deaths in the United States was 122,300, 28% higher than the reported number of COVID-19 deaths, according to an observational study published today in JAMA Internal Medicine.” The discrepancies could be partly due to the intensity and timing of testing. COVID deaths were probably more likely underreported before widespread testing, since the diagnosis could not always be verified. It should also be noted that some deaths are indirectly COVID-related even when completely COVID-free, because people were more reluctant to enter medical facilities to get other symptoms checked during the pandemic.

ADDED 6/26: It is worthwhile to compare the % of positive tests in the USA vs Canada, May 29 to the present. Press on the arrow near the bottom left to animate the map. As you will see, the US and Canada were comparable at the beginning, as indicated by the orange color, but Canada’s color changes rapidly, again and again, getting ever better, while the USA makes no progress. In other words, it’s not increased testing that makes the US infection rate spiral upward, but a failure to control the spread itself. If the USA’s positive rate were less than one percent, ala mainland Western Europe (and now Canada), the number of new cases each day would be below 6,000 per day rather than the existing 40,000+.

ADDED 6/26: It’s not a political thing, it’s a health thing. Even uber-conservative Darth Cheney wears a mask, as did his mentor, Darth Vader.

NUMBER OF TIMES PENCE URGED US TO WEAR MASKS: 0

NUMBER OF TIMES PENCE URGED US TO PRAY: 3


Or as Oliver Cromwell told his men, “Don’t bother keeping your powder dry. Just trust in God to stop their bullets.”

ADDED 6/20: The USA matches up poorly against the EU in its efforts to contain the virus: UPDATED 6/19: This can’t be good: “The antibodies our bodies develop against COVID-19 can fade away in just two to three months.”

ADDED 6/16: Oxford University scientists determined low-cost steroid, dexamethasone, to be the first drug proven to reduce mortality in severe COVID-19 patients, after a 6,000-patient trial. Note that it is only useful in severe cases. No benefit was found in patients who did not need respiratory support.

ADDED 6/4: New studies show that hydroxychloroquine has no value either as a treatment or a preventive for COVID-19.

ADDED 5/30: Vietnam pulled off the ultimate miracle. They had 97 million people, a long border with China, daily flights from Wuhan … and a COVID-19 death total of ZERO! Not one death. Not even one elderly person. How did they do it? All of my guesses were wrong. I figured it was being bathed in the blood of Jesus, having the localities bid against each other for PPEs, downplaying the virus as an alarmist hoax, shilling for unproven drug cures, investigating bleach cocktails, telling the regional governors to open their areas back up without meeting the criteria set by the health ministry, having the highest national officials refuse to wear masks, and holding large rallies as late as March. Damn, I was SO close! It turns out the true solution was for their prime minister to place his idiot son-in-law in charge of co-ordinating the medical supply chain. That would have been my next guess!

ADDED 3/28: The data reveal that covid-19 is much more dangerous for men. The data are consistent from country to country.

On the same day Larry Kudlow said coronavirus was “contained” on Feb. 25th, Trump’s campaign spox made an even more bold claim.

“We will not see diseases like the coronavirus come here..and isn’t it refreshing when contrasting it with the awful presidency of President Obama.” pic.twitter.com/O0DDH3Rvkw