The stats: Coronavirus mapped and quantified:

In terms of fatalities, the hardest-hit countries are not just the Three Blind Trumps any more. Now it’s the four Trumpsmen of the Apocalypse (+ India)

The table below shows the USA’s daily COVID fatalities. Increases over the previous week are highlighted in red.

UPDATED 6/5: Another 1.9 million workers filed new unemployment claims last week, and the number of continuing claims also increased. To make matters worse, an analysis of the coronavirus pandemic’s effects on the labor market estimates that 42% of recent layoffs will result in permanent job loss.

ADDED 6/4: New studies show that hydroxychloroquine has no value either as a treatment or a preventive for COVID-19.

UPDATED 6/3: From the “No shit, Sherlock” department: Sweden finally admits it screwed up. “The architect of Sweden’s controversial lighter lockdown policy for dealing with coronavirus has for the first time conceded the Scandinavian country should have imposed more restrictions.”


From May 27th: Sweden over-Trumps the Trump Trio 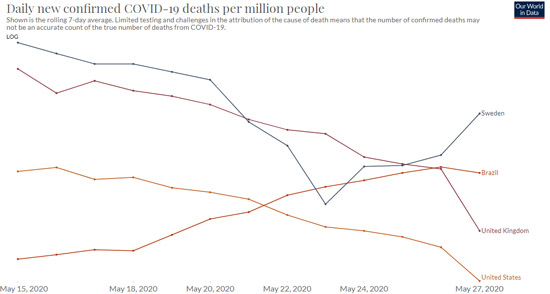 Sweden’s stay-open strategy appears to have been a complete failure in every respect, because (1) it has the highest current fatality rate in the world over the past two weeks; (2) the most recent numbers are not moving in the correct direction; (3) herd immunity is far in the future (only 7% of the residents of Stockholm have developed antibodies); (4) “the economy will be just as badly hit as its European neighbors, if not worse.”

ADDED 5/31: France says, “Oops. Maybe we had the coronavirus before China!” “If confirmed, this is evidence that the virus was spreading in Europe well before COVID-19 had been officially identified in China.” At the same time, Chinese scientists have cast doubt on the theory that the virus originated in that famous wet market.

The South China Morning Post, citing Chinese government data, reported that the first documented case of someone in China’s suffering from COVID-19, the disease caused by the coronavirus, occurred Nov. 17. The new French data suggests that their first case dates back to November 16th!

ADDED 5/30: Vietnam pulled off the ultimate miracle. They had 97 million people, a long border with China, daily flights from Wuhan … and a COVID-19 death total of ZERO! Not one death. Not even one elderly person. How did they do it? All of my guesses were wrong. I figured it was being bathed in the blood of Jesus, having the localities bid against each other for PPEs, downplaying the virus as an alarmist hoax, shilling for unproven drug cures, investigating bleach cocktails, telling the regional governors to open their areas back up without meeting the criteria set by the health ministry, having the highest national officials refuse to wear masks, and holding large rallies as late as March. Damn, I was SO close! It turns out the true solution was for their prime minister to place his idiot son-in-law in charge of co-ordinating the medical supply chain. That would have been my next guess!

UPDATED 5/30: The number of American fatalities caused by the spread of the coronavirus pandemic seems to be understated by about 20,000 to 30,000. “Many Covid-19 deaths were simply listed as some variant of ‘respiratory failure’ or ‘multisystem organ failure.’” “U.S. deaths soared in the early weeks of the pandemic, far exceeding the number attributed to covid-19” At least two states, Florida and South Carolina, are suspected of falsifying the COVID numbers.

This graph is amazing. It shows that measuring #SARSCoV2 levels in municipal sewage almost perfectly predicts forthcoming #COVID19 cases with a full week’s notice (R=0.994). It’s one of several discoveries in this new study from @Yale: https://t.co/hZVdXebx2D. C-19 is #InThePoop pic.twitter.com/shNzTKYoYP

ADDED 5/22: American billionaires got $434 billion richer during the pandemic

ADDED 5/20: The big question comes up again – Can people be reinfected by COVID-19? Thirteen sailors on the Teddy Roosevelt, all considered to have recovered and all having tested negative at least twice, have exhibited symptoms again after returning to duty, and have tested positive. “Whether the afflicted sailors were reinfected or still had the virus after multiple negative tests remains under investigation.”

ADDED 5/19: New polling shows that 49 of the 50 governors have a better approval rating than Trump for their handling of the pandemic. The one exception: Kemp of Georgia. Republican governors dominate both the top and the bottom of the list, with all the Dems in the middle: six of the top seven are Republicans; seven of the bottom eight are Republicans.

ADDED 5/16: President Trump actually said this in opposition to “overrated” testing: “When you test, you find something is wrong with people. If we didn’t do any testing, we would have very few cases.”

ADDED 4/29: New evidence reveals: “Coronavirus infections greatly outnumber confirmed covid-19 cases, potentially by a factor of 10 or more.” My guess it that it’s somewhere between 3-to-1 and 6-to-1. The USA has a ratio of about 18 cases per death. The proper ratio, based upon South Korea and other countries, is probably between 50 and 100 cases per death, indicating a fatality rate between 1% and 2%. That’s a wide range because the calculation is an oversimplification on my part. There are many factors going into the fatality rate, and it’s not necessarily fair to compare areas, but my guess is probably in the right ballpark.

NEW 3/28: The data reveal that covid-19 is much more dangerous for men. The data are consistent from country to country: men make up 72% of the intensive care unit admissions in Spain, 73% in France, 75% in Norway, 71% in the UK. While researchers cannot yet determine how much of the gender disparity can be attributed to behavioral components, it seems clear that the significance of the gap across cultures means that there must be some biological explanation.