I love to write about the obscure underbelly of baseball, about guys like:

Bob “Hurricane” Hazle, a mediocre minor leaguer who had a miraculous dream-come-true season in the majors.

Frank Saucier, an amazingly accomplished man, and a potentially great baseball talent with a .380 lifetime minor league average, who had an embarrassing major league career, the highlight of which was that a dwarf pinch-hit for him.

I have planned other similar stories that sit as yet incomplete. I set aside tons of research to write about others like Floyd Giebell, Moonlight Graham (I assume you know who he was, thanks to Field of Dreams), and a certain Chicago schoolboy legend named Randall Poffo.

As you can see from the article below, young master Poffo was a serious and handsome lad who was once considered the best high school baseball player in the entire Chicago area. Some say he might have become a great star, except that a serious injury forced the right-handed kid to learn to throw left-handed, and therefore forced him to switch from catcher to first base or the outfield. (No catchers throw left-handed.) After the switch, his White Sox coach told him he threw like a girl. In spite of those obstacles, he managed to last four seasons in the minors. 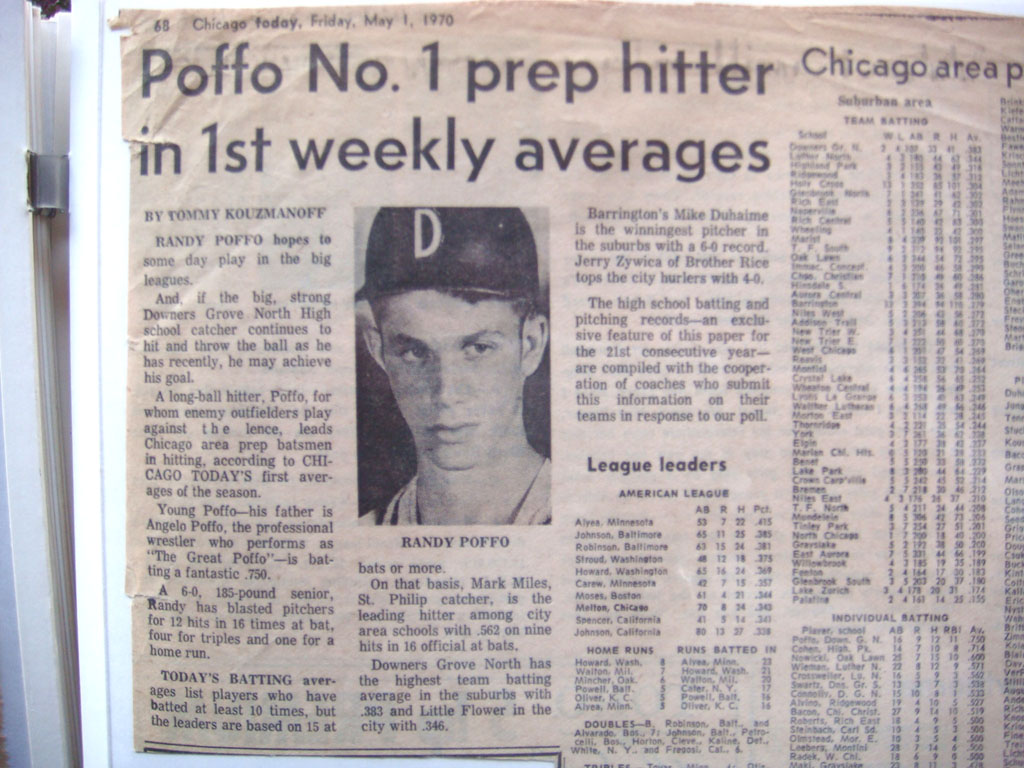 What made him so friggin’ interesting? Well, it was the fact that he eventually became a household name, one of the greatest all-time superstars in a very different form of athletic endeavor. He is better known to the world as The Macho Man, Randy Savage.

I actually kinda knew him because he was the main man for Slim Jims and my company (7-Eleven) was their biggest customer. I took a picture with him at the Slim Jim hospitality suite of a convention, but he never came out of character then. Later that night, I ran into him in a strip club when he was in civvies and de-machoed, and we had a great talk about baseball!

I also spent a lot of time one evening talking to The Ultimate Warrior (and his beautiful girlfriend). Mr. Warrior appeared to be a very pleasant, intelligent and laid-back man, although some fans and some of his colleagues didn’t care for him. Maybe I got to him before ‘roid rage kicked in. It was kinda weird to talk to him because he was dressed in character with the face paint and the bare bulging muscles, but he walked up to me and introduced himself as “Jim.”

Ol’ Jim has shrugged off the mortal coil now, as has Randy. Neither lived to blow out the candles on his 60th birthday.

2 thoughts on “If you like wrestling and/or baseball, you should love this”