“Lilith” never did a topless scene, but she did wear thongs in: 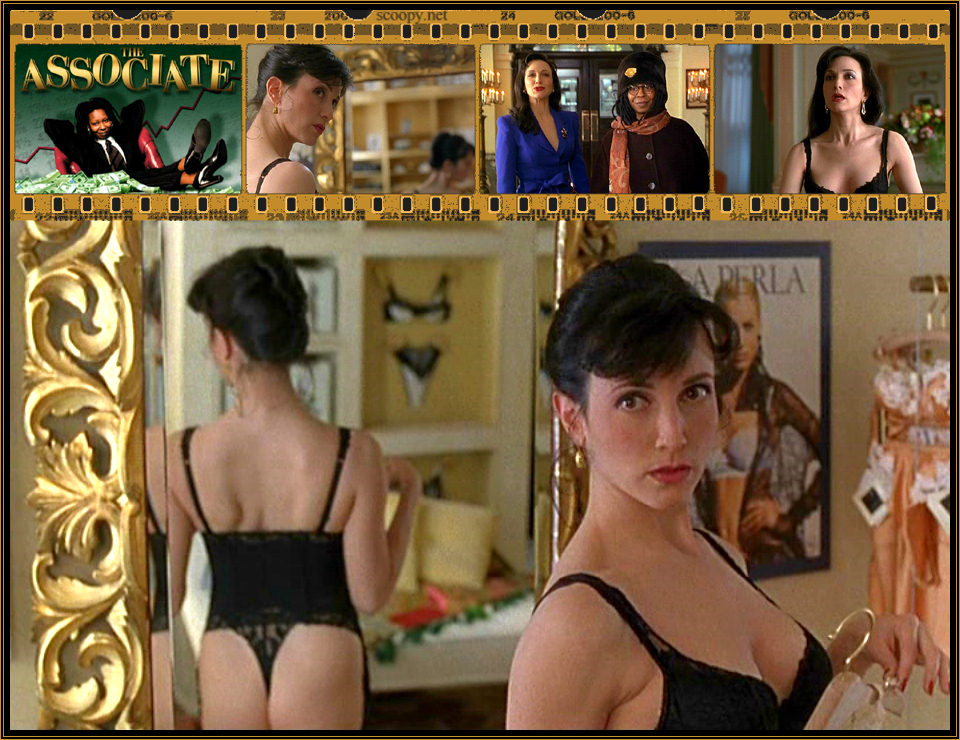 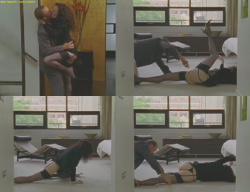 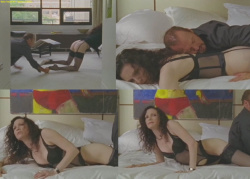 She was 47 when she did Game 6, but obviously still in great shape.

Bebe looked great in The Associate, and I kinda liked the film – up to a point. (My typically long-winded notes after the jump.)

The Associate is Tootsie in reverse. It doesn’t start out that way, but that’s where it ends up.

Whoopi Goldberg plays the best financial advisor in New York, a brilliant analyst who is locked out of the big time in the investment world because she is a funny-lookin’, dreadlock-wearin’, Annie Hall-dressin’ little black woman. Her white male associates steal her ideas and weasel their way into upper management.

There is only one way for her to get around the problem of not being a good old boy. She becomes one. At first she just creates a fictitious one as her partner. She opens her own firm with the non-existent middle-aged white man as her unseen partner. She goes to great pains to create a complete life for her missing partner, one that will dazzle her prospective clients, including big game trophies, Harvard diplomas, pictures autographed by JFK and Joe Montana, etc. The fictional “Robert Cutty” is invariably “out of the office” when people call, because he is taking lunch with the President or the Pope or Alan Greenspan or somebody equally important.

Unfortunately, Whoopi’s imaginary white male partner ends up undermining her just as much as the real ones always had. All the male clients want to do business with someone like themselves, therefore with the unseen white-haired financial guru, and not the quirky sista, so the situation evolves to a point where “Robert Cutty” can no longer avoid face-to-face meetings.

Up until that mid-point in the film, the script had been a reasonably tidy little light comedy/drama with some social commentary, ala Trading Places. Whoopi did a good job of managing the central conflict, i.e. the fact that her partner was never there. There were some cute cameos from Donald Trump and other New York celebs, and the film was rolling alone fairly well. The ultimate corporeal appearance of the previously unseen Cutty, however, changed the nature of the film and created a high hurdle in the middle of what had previously been a sprint on flat ground. The focus of the viewers’ attention suddenly became, “Can Whoopi Goldberg play a senior white male financial guru convincingly”. The answer is a qualified “yes”. Whoopi did a surprisingly good job with the voice, the mannerisms, the body language, and the walk. She is not Dustin Hoffman, but you could believe that she really might fool her business acquaintances for short periods of time in the right circumstances.

Sadly, the make-up department really let her down. She looked like she was wearing Chief Dan George’s death mask, complete with pony tail. (In fact, now that I think about it, she looked exactly like an older version of The Indian in Body Double, another character that was formed by a latex disguise.) This is unfortunate for two reasons.

First, because it spoils the illusion of credibility that she had been maintaining, thus spoiling the fun of the film.

Second, and possibly even more important, it reveals that the writer didn’t know what the hell he was doing, thus spoiling the film’s serious points as well. For the ruse to work in real life, Whoopi would have needed to be not only ANY white man, but a specific type of white man. In order to fit in with her clients, she needed to be conservative, clean-cut, and distinguished but not flashy – a Donald Rumsfeld type. The REAL corporate world would have found the eccentric hippie-lookin’ old Cutty to be no more acceptable than Whoopi’s own natural appearance. The screenwriter just didn’t understand that the good old boys wouldn’t reject Whoopi because she was black and/or female, but because she was not like them. Her version of a white man would be rejected for the exact same reason. The script’s blissful ignorance of this point makes the second half of the film play out like some third-rate effort in 60s theater of the absurd, after the first half had made some pretty nifty little social observations.

More’s the pity that the film is also missing a vital comic spark. Whoopi’s cronies and confidantes consist of the stock transvestite best friend, and earnest, unfunny Dianne Wiest. In other words, the usual suspects. Tootsie, on the other hand, had wisecrackin’ Bill Murray to comment on the action, and thus to turn the alleged comedy into an actual comedy by adding a little thing we comedy buffs like to call “laughter.” There is no Bill Murray substitute to be found in this cast.

The final problem with the film is that it fails to meet the minimum requirement for a cross-identity gimmick because one of the two identities has no personality. In Tootsie, Dorothy Michaels is actually more interesting than Michael Dorsey, despite the fact that she doesn’t exist. The same is true of Mrs Doubtfire. In this film, the fictional character is a cipher, nothing but a voice coming from underneath some latex, and not someone that we think we know.

So the film came and went without being noticed, and is now only vaguely remembered.

In truth, The Associate is not a horrible movie at all. It is a pleasant enough watch. If the script had created a real Robert Cutty, with his own personality, the clean-cut appearance of a respected financial magnate, and a decent make-up job, Whoopi might have been able to mold this into something special, because she seemed to be able to play a man without artificiality. If the filmmakers had then replaced Dianne Wiest with somebody with a gift for wisecracks, ala Carole Lombard in those 30s films, the film might have been able to attain classic status. As it is, it’s unremarkable and unmemorable, but like chicken soup, it won’t hurt.