OK, maybe it should be called a “transit” rather than an eclipse, but it is still fascinating to see odd-shaped Phobos make its way across the sun.

It leads one to ponder the wonderful celestial coincidence that our moon and our sun appear to be almost the same size (and shape) from our perspective, thus creating such spectacular eclipses.

Joan Blondell started in Hollywood at the very beginning of the Precode Era, and over its length – the four and a half years from 1930 to mid-1934 – she appeared in 25 movies. Often she did so while pushing the envelope of what could be shown or said. For me, an interested amateur, any appearance by Ms. Blondell is worth a look, no matter the quality of the film. A real pro who knows Precode films very well has posted dozens of videos to YouTube on that subject; one such video includes scenes from several of Joan’s more risqué performances. Easy enough to grab a few frames and stick them together. Forgive me because I don’t know the titles of the films in which these scenes appear, but she looks terrific and that’s what counts. 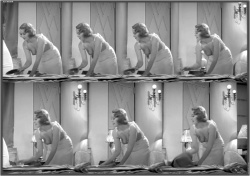 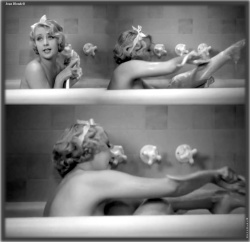 Joan was still around when I was young. Her most acclaimed late-in-life performance was in The Cincinnati Kid, but you’d mostly see her in the same kinds of comic roles that might also have gone to Vivian Vance or Bea Benederet. You’d see her showing as much cleavage as the 50s and 60s would allow, as the wisecracking widow who was too old to be acting like that when she shamelessly flirted with people like Don Porter or Buddy Ebsen.

Back in the thirties, however, she was a major star and a major babe. Here are some clips of Joan in action.

There are also some alleged nudes of her online, but none are especially convincing.

I know it sounds like a bad children’s book, but it’s actually a new, R-rated series from Argentina.

They apparently outbid the Angels, who offered him only $30 million not to play.

Jokes aside, this is the inevitable product of the clubs’ willingness to give players long-term contracts that extend beyond their useful playing years. Then the clubs’ only choices are to take up a roster spot with a fading (or faded) star, or to pay them not to play. It’s difficult to sympathize with an owner in this situation because they agreed to the contract in the first place, or traded for the guy knowing the reality of the situation.

Cano was a terrific player about a decade ago. In one 5-year period he never finished lower than 6th in the MVP balloting. His lifetime average is .302 with more than 900 extra base hits among some 2,600 total hits. He is among the top ten of all-time in WAR for a second baseman. That is HOF caliber for a second baseman. In fact his stats are better than most HOF second basemen. There are 12 second-basemen in the HOF with a lower lifetime WAR than Cano, and only seven above him. There are good explanations for some of the guys below him: Jackie Robinson’s career was short for reasons we all know; Bill Mazeroski is not in the HOF for his offensive prowess, etc. But even if you scratch those exceptions, he is still better than, or at least equal to, the average HoF second baseman. That’s mighty good.

But he was 36 in his first season with the Mets, so the Mets agreed to pay him about $20 million per year for ages 36-40. That was a big gamble.

Cano is not the only one to receive the largesse of owners agreeing to poorly conceived contracts.

The Angels could have paid Albert Pujols not to play, but they elected to pay him an average of $24 million per year for ten years to be a first baseman / DH with below-average production for those jobs. His line with the Angels was .256/.311/.447. That on-base percentage was not only lower than a typical first baseman, but was also below the major league average for any position in that period. (And that average includes National League pitchers!) In the final half of that contract period, his slash line was .242/.292/.408, which equates to an OPS+ of 87. (That means his production was 13% lower than that of a theoretical average major leaguer in the same offensive context). A young player could keep a place in the line-up with numbers like that only if he happened to be a slick-fielding middle infielder. A young first baseman with that kind of MLB production, in lieu of $24 million, would be handed a bus ticket to Texas to suit up for the El Paso Chihuahuas.

This country is doomed. pic.twitter.com/FwruuhfNdD