Video shows Peruvian model Paula Manzanal, 28, posing next to the monkey at the Ubud Monkey Forest – only for the animal to reach out and try and pull down her black strapless top. 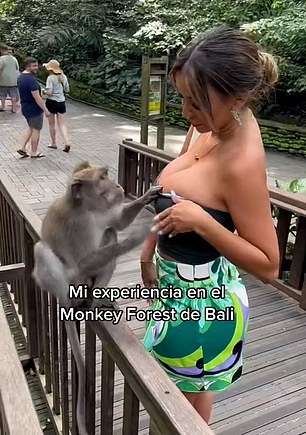 “While we’re incredibly saddened by the loss of Representative Tony DeLuca, we are proud to see the voters to continue to show their confidence in him.”

Makes sense to me. Not many people voted for Lazarus, and then they were sorry when he lost to a MJGA candidate just before his resurrection.

I’m not sure why the vampire was hanging out at the swimming pool, but I guess we can rule out “catching some rays.”

That reminds me that we had a vampire second baseman on our college baseball team. That guy could rake, and was always joking about how he was a baseball “bat.” Pretty funny for a bloodsucker. He would have been our star, but unfortunately, he had to platoon with a little Dominican guy who could play day games.

No, it’s not what you’re thinking. He was not a Dominican from the Dominican Republic. I think he was French. You see, I went to a Catholic college, and he was literally a Dominican – from that religious order. Brother Hervé was his name. He and the vampire never got along during our evening practices, which was the only time they ever had to interact. It wasn’t so much that they competed to start at the same position, but rather that they were always arguing about crucifixes and holy water, and whether a baseball bat was technically a form of wooden stake.

On the other hand, I’m pretty sure Brother Hervé would have killed the vampire to get more playing time, but he could never find his coffin.

“Palmer Luckey, defense contractor and the father of modern virtual reality, has created a VR headset that will kill the user if they die in the game they’re playing.”

Get ’em, while they last. Only four hundred bucks.

For just a few bucks more, you can also mix your loved one’s ashes with confetti, glitter and/or streamers.

You can get the latest version of the Eric Roberts sex chair for about 28 grand, or maybe the AMAN SUITE AND SPA HOUSE EXPERIENCE – starting at forty grand for a one-night stay. There’s a “vintage” Ford Bronco for a quarter of a million dollars, or a luxury trip to New Zealand for $286,000. If you can’t afford New Zealand (you fucking peasant), you can always settle for the African safari, priced to sell at only $135,000.

If you’re a little tight on cash this holiday, maybe a $1200 Hermes box for dog toys will suit your obviously plebeian pocketbook. There is also a $400 leash and a $350 collar for your pooch.

I bought everything in the catalog. Just call me Uncle Goopy.

How could they possibly have seen that coming?

Here’s how I knew in advance that this could be a problem, and that I probably should not attend: the event is called “venom fest.”

Here’s a guideline for you:

That’s a funny headline from the Onion, but the ancient Iowan seems safe for re-election to an eighth term six-year term …

… assuming he lives one more week until election day, which is probably an even-money bet.

Grassley is 89 years old and will probably be the president pro tempore of the Senate if the GOP wins. It is an honor usually accorded the senior senator of the majority party, and a position Grassley previously held. That’s largely an honorary position, but we often forget that it stands third in line to assume the Presidency behind the VP and the Speaker of the House. The current order of succession is Kamala Harris, Nancy Pelosi, Patrick Leahy. If the GOP takes control of both houses, the order of succession would likely be Kamala Harris, Kevin McCarthy, Chuck Grassley. I’m going to go out on a limb and say that’s not really our all-star team.

Grassley would not be an automatic selection and there are no constitutional mandates to guide the selection. The choice of the senior senator of the majority party as pro tem is merely a tradition, not a requirement. The constitution does not even require the position to be filled by a member of that chamber. As senate.gov notes, “Although the Constitution does not specify who can serve as president pro tempore, the Senate has always elected one of its members to serve in this position.”

The same is true of the Speaker of the House. The members can vote for absolutely anyone. To make a radical example, a GOP-controlled House could elect Donald Trump as Speaker, which would give him a tremendous amount of power over investigations of himself and his enemies, as well as great power over the government’s purse strings. (Despite the fact that we have lionized and even apotheosized the Founding Fathers, they could not possibly have foreseen every possible pitfall of democracy.)

Speaking of ancient politicians, why did we start to elect these old geezers?

Joe Biden is the oldest man ever to sit in the oval office, and he assumed that title on the day he took office. Biden was already older at the beginning of his term than Reagan was at the end of his.

At 78 years and 61 days, he was by far the oldest man ever inaugurated, breaking the previous record by 7 1/2 years.

(And of course Biden would also break his own records should he run again and win.)

There are not many up-and-coming young political superstars. Ron DeSantis is 44, Buttigieg is 40. Behind them the ranks are thin.

Another tale of woe from my youth. I gave this as a corsage to my prom date.

I guess it wasn’t that bad. She only had to be kept in isolation for three days.

Three days after they revived her, that is.

I guess it’s just as well I didn’t get into Vampire Academy. I probably would have screwed up and given my prom date a corsage of garlic and wolf’s bane.

“A sizable portion of the stockpile is stored in a massive underground warehouse (a former limestone quarry) outside of Springfield, Missouri.”

If cheese ever becomes a precious commodity, Fond du Lac is the Dubai of the future. We’re building those skyscrapers now, on spec. We already have one that’s the tallest building in northern Wisconsin – nearly the size of a five-story building if you count the antenna, which admittedly comprises four of the five stories.

What a bunch of asses.

Yeah, like it matters. If Mondrian came back to life and saw it there, he probably wouldn’t even realize it was “wrong.”

Bullshit claim of the day:

“The thickening of the grid should be at the top, like a dark sky. Once I pointed it out to the other curators, we realised it was very obvious. I am 100% certain the picture is the wrong way around.”

Alternate bullshit claim of the day:

“The work does not bear Mondrian’s signature, possibly because he hadn’t deemed it finished.” Once again, if Mondrian came back from the dead, would he know whether it was finished?

“At more than 35,000 square feet, the mansion was designed to feature 16 bathrooms, a gym, barber shop, theater, and library. Last year, the property reportedly sold to an entity tied to William Lauder, a billionaire heir to the Estée Lauder makeup fortune, for an astonishing $110 million. But the palatial estate is apparently not up to his family’s standards. On Wednesday, the town approved a plan to tear down the home — built just six years ago — to the dirt.”

From getting ‘messages’ to enjoying a ‘piece’ – the most popular phrases that always cause confusion for non-Scots.

END_OF_DOCUMENT_TOKEN_TO_BE_REPLACED

It is no longer possible to distinguish reality from an SNL skit or an Onion article.

Reminds me of when Elvis net with Dick Nixon and was awarded a special badge.

By the way, I am an aviator and secret agent, by virtue of the fact that I have a Captain Midnight decoder badge. Hey, it says “secret” right on the badge.

Although admittedly, showing the badge labeled “secret” does kind of spoil the secrecy. 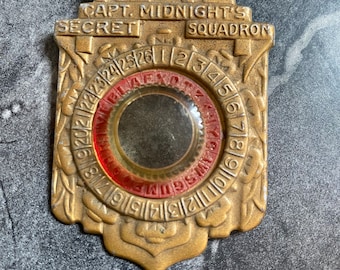 “Justice through strength and courage.
And Ovaltine!”

In fairness to Herschel Walker, I sometimes pull out my Star Fleet badge to get past security at Star Trek conferences.

I hate to be that “back in my day” guy, but the most exciting thing that ever happened in our gym is when they decorated it with cardboard lances, papier-mache armor and assorted King Arthur fol-de-rol for the “Camelot” prom. King Arthur was appropriate because our sports teams were the Kings, and our spirit animal was (oddly enough) Bea Arthur.

Kidding aside, when JFK died the country kinda went Camelot-crazy. That musical was a big hit on Broadway, and Kennedy really got caught up in the Arthurian idealism. He styled his cabinet as the figurative round table, and referred to his Presidential administration as Camelot. Sadly, Lee Harvey Oswald never foresaw the worst possible consequence of his action – that a grief-stricken America Would allow Robert Goulet to sing “If Ever I would Leave You” on every variety show for another twenty years.

As for the wild action at the prom that night …

When the chaperones/DJs got really crazy, they played a soft-rock song instead of the usual Jerry Vale tunes. It was utter mayhem, I tells ya. Why, some of the older, more sexually experienced guys even moved their hips when they danced, shocking the teachers and parents who were monitoring our every move.