Yelich had another big game, with two dingers. If he has another one tomorrow, he has a chance to win the first triple crown in the National League in more than 80 years! The last guy to do it was “Ducky” Medwick in 1937. (It has been more common in the AL, where there have been six post-Medwick triple crowns including one in 2012.)

As of now, with one game remaining, here are the stats:

Batting Average: he has it locked.

Homers: he’s tied for the lead

RBI: he’s two behind the leader.

He will definitely play tomorrow because the game is important to the Brewers, who are deadlocked with the Cubs, with one game to play. 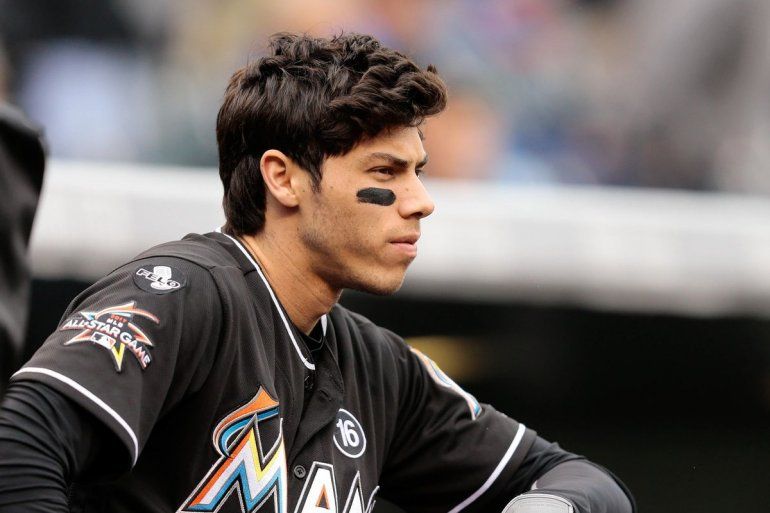 It’s hard to believe the Marlins let this guy go. They drafted him, developed him through the majors and minors for eight years, then traded him to get prospects and keep payroll low.

And now it seems that he’ll be the league MVP.

And the Marlins have the worst record in the league.

Being a Marlin fan must be one of the most frustrating things in sports. They do this all the time. Yelich was the fourth key starter traded by the Marlins under their new CEO Derek Jeter. They also dumped last year’s MVP (home run king Giancarlo Stanton), plus speedy stolen base king Dee Gordon and an all-star left fielder in Marcell Ozuna (whose triple crown numbers last year were better than Yelich’s this year). Yeah, that’s right. In Stanton, Yelich and Ozuna, they dumped their entire outfield. And not just any outfield, but arguably the best in the majors.

This is not something that began under Jeter. The Marlins have done this for decades. After their World Series win in 1997, they basically jettisoned the entire team and lost 108 games the very next year.

Another interesting thing to watch tomorrow in the NL:

Although the five playoff teams have been determined, two of the three division champions have not! The Brewers and Cubs are tied in their division, and the Rockies and Dodgers are tied in theirs. They will be trying their best tomorrow. Nobody wants to be a “wild card” team, because that requires a one-game playoff to make the REAL post-season.

The teams do not play one another, so it is possible that both division races may result in ties. If that happens, there is a one-game playoff between the deadlocked teams. The loser (or losers, if both divisions end in a tie) will then face a second one-game playoff with the other wild card team.

Is it Katherine Hepburn talking about Spencer Tracy?

But unless you’ve already seen this, you’ll never guess the speaker or the object of love.

THE TOP 10 THINGS PEOPLE DO AFTER SEX

Rudy Giuliani tweeted about “Lindsay” Graham: “He voted for Justices Sotormayor and Kagen on old fashioned principles. I also did.”

OK. I admit that people claim all kinds of shit. Scoopy’s First Law of the Universe is this: No matter how stupid any idea is, there will be many people who believe it, and even take credit for it. Some even claim ice dancing is a sport.

This claim, however, is so far from reality that nobody has even been able to figure out what the hell Rudy is talking about. When would he have had a chance to vote for the confirmation of Supreme Court justices? He has never been a Senator. Mayors don’t get a vote.

Furthermore, he misspelled the names of both judges, plus Graham’s first name. (Not to mention the word “old-fashioned.”)

The only thing people have been able to deduce is that “Lindsay” and “Justices Sotormayor and Kagen” must be three people from an alternate universe into which Rudy has found a portal, and has become a Senator. It’s almost like our universe except for three things:

everyone good here is evil there

Spock has a beard.

Note: do not confuse Scoopy’s First Law with Scoopy’s Prime Directive, which goes as follows:

If you are making a movie and are certainly going to get an R rating for violence (or cussing), load up on breasts, because no quantity of breasts will earn you an NC-17. It will be an R with or without breasts.

The Johnny Cochrane version: “If the R is for V, the tits are free.”

I definitely go to the wrong supermarkets. Nobody at Pic’ ‘n Save looks or dresses like Demi Rose

The video below shows her from ages 1 to 42

I’m not sure why there would be controversy. Who cares what he calls himself?  But for what it’s worth …

Again, I know neither whether these are authentic nor where they come from:

Jennifer Grey ?? … I guess I don’t really know what she looks like now, but I certainly don’t recognize her in this pic.

So far there is just one teaser pic

Phoebe Cates naked in Paradise. This film came out the same year as Fast Times at Ridgemont High, so Phoebe kinda owned the best nude scenes of 1982.

Lindsay Lohan wins the most bizarre video of the month … as she accuses parents of trafficking children and then gets punched in the face.

“They’re in a leaky boat that eventually will sink.”

They were founded in 1902, just ten years after Sears.

… but it’s not a record he’ll crow about.

In the long and storied history of major league baseball, dating back to 1871 or 1876 (historians disagree about whether the National Association {1871-1875} should be considered a major league), no player has ever compiled a worse batting average in 500 or more plate appearances.

It looked iffy for a while because Davis was batting .180 on September 5th, and was on a tear, having batted .344 in his last eight games. But he was more than up to the challenge, finishing the season 1-for-37 to crush the record.

The Yankees set the all-time team homer record on Saturday, with 266. They have one more game tomorrow.

And they did that with Aaron Judge missing 50 games!

Caveat emptor. Or maybe caveat surfor – let the surfer beware. (Pretty sure the ancient Romans had no word for “surfer,” so I’m going with “surfor.”) As usual with alleged leaks like this one, I have no idea where they came from or whether they are legitimate.

Dana is a relatively obscure actress. Here is her IMDb page.

The bottom portion of her outfit is nearly non-existent

I don’t usually learn much from the posts on Cracked.com, although I sometimes enjoy their take on things. This article is an exception. I learned a lot.

I didn’t know that there was an American town completely within Canada. In order to get from Point Roberts, Washington to any other part of Washington, there are only two options: take a boat, or drive through Canada! One of the coolest things about this situation is that Point Roberts is too small to have its own school system beyond third grade, so the children there have to be bused through Canada and back into the USA twice a day – four border crossings every single weekday.

I didn’t know there was a walled-in Spanish town (Melilla) completely on the continent of Africa.

I know that the Balkan borders are sometimes crazy, but I didn’t know that Croatia is split into two halves separated by a six-mile stretch of Bosnia. This presents so many border-related traffic problems that Croatia is trying to negotiate a plan to build a six mile bridge over the Bosnian territory. (Of course they need Bosnia’s permission to build the chain of supports on Bosnian territory.)

And some of the other examples are also fascinating!

A cam clip of Amber Heard naked in London Fields

… and here’s the very first clip we saw