Trump seems never to have come across that famous proverb about people who live in glass houses. One of his professors, long before Trump entered politics, called him, “the dumbest goddam student I ever had.”

AOC’s response was to the point:

The alleged Trump report card pictured above is a ridiculously bad forgery. Donald and I were both students at Fordham University in calendar year 1966. Here is what the grade reports looked like in that era. 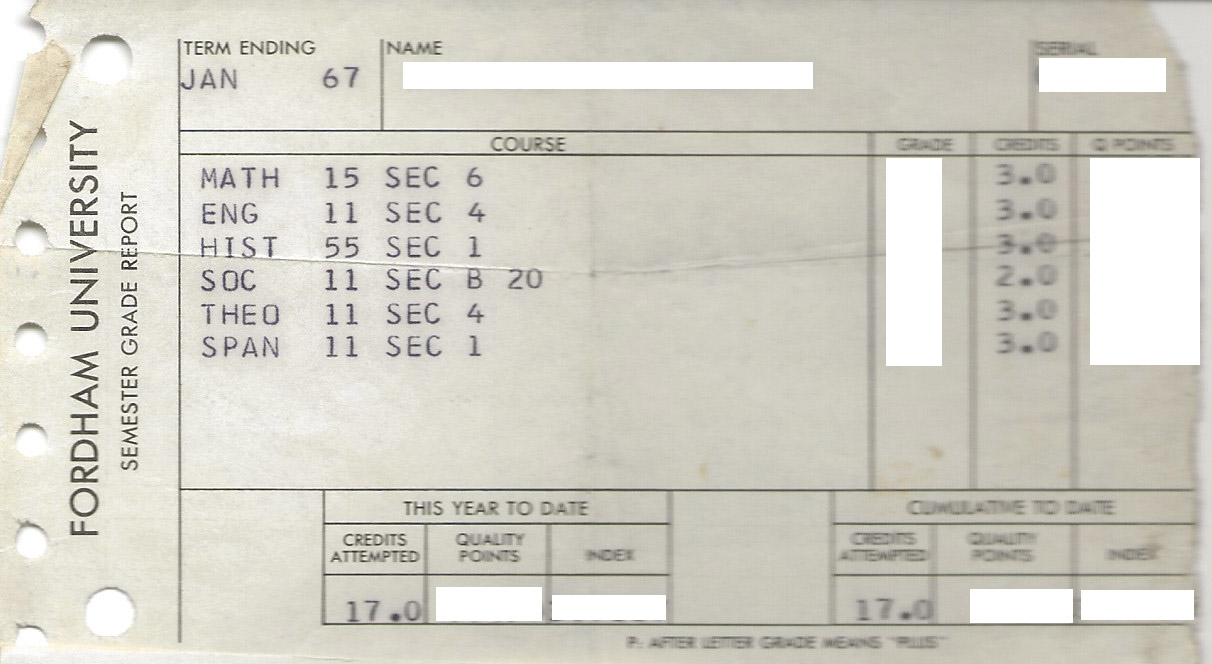 And here is what the grading system looked like in the late 60s. (It was identical in 1966, except without the “P”

So the problems with the forgery are:

1) It is anachronistic. Nothing looked that sophisticated in 1964-66.
2) Many of the grades on that report did not exist at Fordham then. In that era, there was no A-, B-, C-, D+, D- or F+. Many of the old-time teachers didn’t even like the new-fangled “plusses” and awarded only A, B, C, D, F.
3) The course numbering is wrong. In that era, the second semester of an intro course at Fordham would be numbered 12, not 102. That changed in the 67-68 year, but Trump was gone by then.
4) All real grade reports from Fordham in that era are clearly dated “Jan” or “June” of the appropriate year, marking the month after the conclusion of the semester, as shown above. The fall semester of 1966 would be dated “Jan 67,” as shown above. The spring semester would be dated “June 66.”

I will certainly be happy to compare grade reports with The Donald for that 1966 year, and will be pleased to add a large side-bet to the winner (me).

In fairness, Trump was not a D student at Fordham (as pictured by the fake grade report). Two people who saw his grade reports said they were in the C+ to B range. That’s not bad, but Mary Trump points out in her book that Trump’s sister did all his home assignments for him, so I suppose he would have not done that well on his own.