I think this scene in Hell Riders (1984) is the only time we got a kinda clear look at Tina Louse’s nipple.

She was briefly topless in Mean Dog Blues (1978), but the camera angles prevented us from seeing any of the best stuff. Maybe a brief flash of nipple. Maybe not. 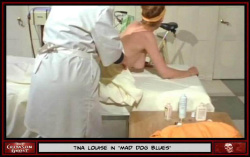 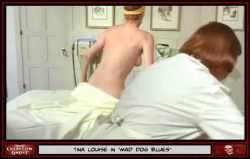 Her only other nudity wasn’t really with mentioning, but for the record, it was a one-frame flash of plumber’s crack in The Good Guys and the Bad Guys

Tina Louise had always been openly unhappy with Gilligan’s Island, which she considered to be beneath her dignity. I have to say that her overall level if dignity must have sunk somewhat by 1984, because compared to the cast of Hell Riders, the cast of Gilligan’s Island seems like a combination of the Mercury Theater and the Royal Shakespeare Company. This is just an awful movie. It really has only about twenty minutes when anything happens, but it’s padded out to feature length by endless shots of guys riding cycles. They aren’t racing or doing anything interesting. They’re just endlessly riding, riding …

When they finally decide to ride to someplace, their destination is a small town, where they plan to terrorize the locals. They certainly picked the wrong small town, however, because this one is guarded by Batman (Adam West), who promptly kicks the crap out of the bikers’ leader, then rallies the locals to round up all their firearms and fill the rest of the pesky cyclists full of lead.

This film is dated 1984, but it seems anachronistic. Except for the ages of the two familiar stars, I would have guessed it was from 1971 because it plays out like all of the crappy biker films that filled the drive-ins in the late 60s and early 70s. Tina Louise and Adam West must have been truly desperate for work to take these roles.