An excellent and very entertaining nude scene from the long-ago era when Cousin Eddie seemed like a normal guy.

“The elders fined him $12 Zimbabwe dollar, a bottle of Schnapp and 3 goats.”

Thank God he had a good lawyer.

He got to keep his chickens.

Ashley became semi-famous just for posting photos of herself on social media.

It is a spirited sex scene:

“In the home half of the fourth, though, the scorching Eddie Rosario hit a two-out, three-run homer off Los Angeles starter Walker Buehler to give Atlanta a 4-1 lead and change the tenor of Game 6. The home run was Rosario’s 14th hit of the 2021 NLCS, which ties the all-time record for most hits in a postseason series.”

That's 14 hits for Eddie Rosario in the NLCS, tied for the most in a single postseason series all-time, with:

Each of those other guys did it in a seven-game series. Rosario is the only one to do it in six. The others had at least 28 at bats and as many as 34, while Rosario needed only 25.

The Braves seem overmatched, but then again they have seemed overmatched in every series. Hell, they seemed overmatched in their own division when they started the season 37-41 and were in fourth place out of five teams in baseball’s weakest division. It really looked bleak when they lost their best hitter four games later. Acuna had been the cornerstone of their offense in that first half, and appeared on his way to a 50-homer season. But they actually did better without him, and here they are, so you may not want to bet against them.

It is so named in honor of the greatest role of my favorite living character actor (since Wilford Brimley died), and my fellow Longhorn, the F man himself. Happy 82nd birthday, you magnificent, Mozart-killing bastard. 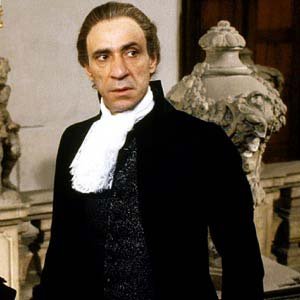 1. The F doesn’t stand for anything. His name is Murray Abraham, but he thought that sounded undistinguished and pedestrian, so he added an initial to make him sound special. He chose F in particular in honor of his dad. (Wikipedia) In theory, it should be written without the period, since F is just F and not an abbreviation, but he spells it with the period.

2. If you have never heard him speak as himself, you should Google him. Unlike the other people I make fun of, he is cultured, spiritual, articulate, generous and highly intelligent. He plays sinister characters because he has a baleful appearance. Some people assume that actors with faces like Abraham and John Colicos must resemble the characters they play, but they are just actors making optimal use of an asset – their villainous countenance. An example of the F man’s classy nature can be found in his Oscar acceptance speech.

3. In slight contradiction to what I wrote above, the F Man appears to have gotten a bit of a swollen head after he won that Oscar. The director of The Name of the Rose, Jean-Jacques Annaud, described Abraham as an “egomaniac” on the set, who considered himself more important than Sean Connery because Connery did not have an Oscar. That must have been quite a match of outspoken egos, since Connery himself is no shrinking violet.

4. Nah, the real Salieri wasn’t evil either, and there is no evidence that he somehow caused Mozart’s death. That was merely the gossip of ignorant idlers until the great Pushkin, who was basically the Russian Shakespeare, gave the whole thing credence when he wrote a play about it shortly after Salieri’s death, using jealousy as his fictional motivation for Salieri’s actions. Pushkin was a brilliant wordsmith, some say the very creator of modern Russian, but he was no historian, and was also a hot-headed ass whose character flaw was … (wait for it) … jealousy. In English we often use the expression “fatal character flaw” with no regard for the literal meaning. In Pushkin’s case, his propensity for jealousy was indeed fatal. You can assume that his version of Salieri is a rather obvious subconscious representation of himself. In reality, Antonio Salieri was respected by no less a genius than Beethoven, and all of Mozart’s closest friends and associates continued to associate cordially with Salieri after Mozart’s death.

5. The great genius’s name, at least the part between the Wolfgang and the Mozart, was not Amadeus at all. In birth it was Theophilus – Greek for “beloved of God.” Amadeus is simply the Latin equivalent. Mozart himself used the French, German and Italian versions at various times. (Amade, Gottlieb and Amadeo, respectively.) A benefit concert for Mozart’s family was held in Prague on December 28, 1791, billed as “Concert in memory of Wolfgang Gottlieb Mozart.” On his marriage registration, it has been mysteriously Anglicized to “Adam” – Wolfgang Adam Mozart! His earliest biographers used Gottlieb as a middle name. As far as we know, Mozart never once referred to himself as Wolfgang Amadeus Mozart, although he did jokingly sign correspondence in pseudo-Latin as Wolfgangus Amadeus Mozartus. Somehow, in the 19th century, Mozart’s little jest became his posthumous reality. (Many details here.)

SIDEBAR: Tom Hulce played Mozart in that film. If he were cast today, he could play Steve Bannon.