The national testing rate was 6.0% on Sunday. The most current seven-day rolling average rose to 6.1%.

The following states are in the CDC-defined red zone (10%). (Pluses and minuses indicate the upward or downward motion of the rate. Multiple signs indicate the number of consecutive days in that direction.) These are Saturday’s numbers. The state-ranking database is not updated on Sunday.

The computer model predicts that 319 thousand Americans will die of COVID-19 by January 1, and the number will rise to 386 thousand by February 1.

ADDED 10/19: China becomes the first major economy to recover from the COVID-19 pandemic

ADDED 10/14: “Proposal to let coronavirus spread naturally through US population interests White House and alarms medical establishment.” The math surrounding that strategy is terrifying. Scientists say that herd immunity requires about 2/3 of the population to have the antibodies. That’s 220 million people. In the USA in recent months, about 1.4% of the people who get the virus do not survive it. In other words, achieving herd immunity without a vaccine will require about three million Americans to die … and that’s IF IT WORKS!

ADDED 9/24: What’s Behind Mainland Southeast Asia’s Surprising Success Against COVID-19? Laos and Cambodia have recorded NO deaths from coronavirus. Vietnam has 35 deaths in a country of about a hundred million people. Thailand has 59 deaths amid a population of about 70 million.

The following graphs tell a clear story of what great work we did in chipping away at the infection rate and the overburdened hospitals when we were sheltering in place, and how we, by our own carelessness, undid all the good we had done. 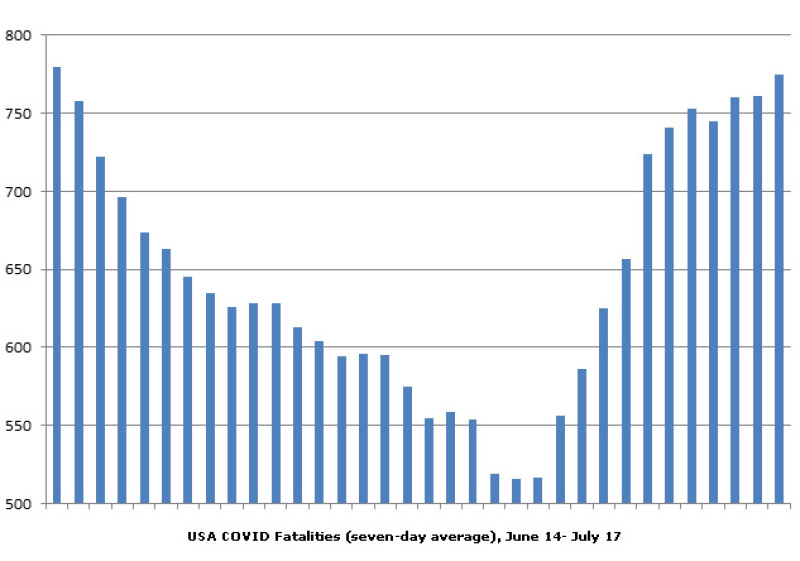 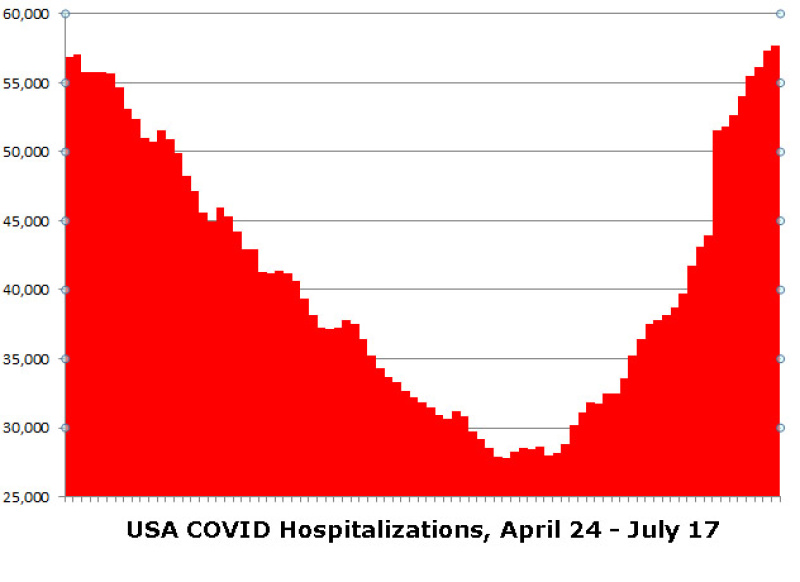 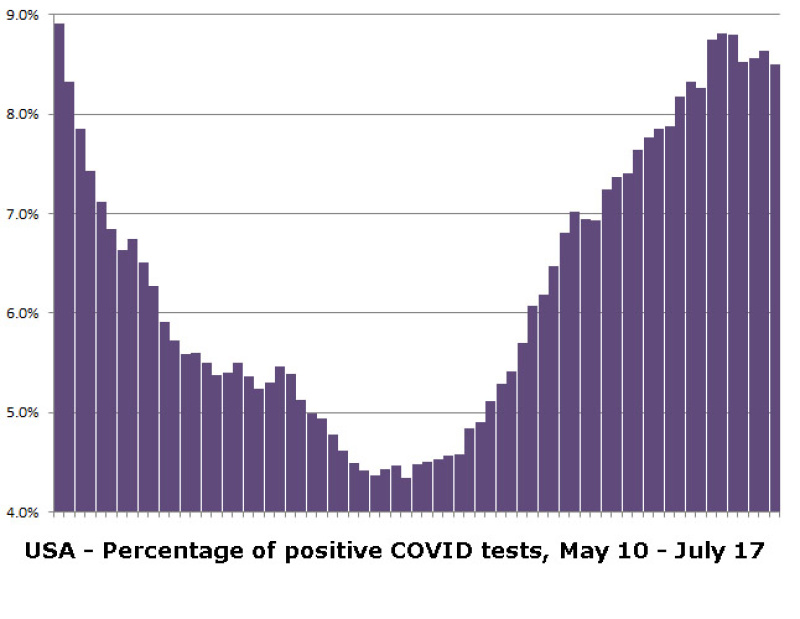 The third chart shows the seven-day average, not the actual for each day

The source of the testing and hospitalization data is here.

ADDED 7/15: In a masterpiece of reasoning worthy of Descartes, Trump says the U.S. would have half the number of coronavirus cases if it did half the testing. (Of course it would have the same amount of cases today, and more tomorrow, since the undetected cases would cause spreading. It would have fewer cases reported in the short term, but that’s not much of a goal.) Even more important, fatalities and hospitalizations are also rising again. I suppose his solution to that is to close the hospitals and morgues.

UPDATED 7/8: “Any proposed approach to achieve herd immunity through natural infection is not only highly unethical, but also unachievable.” Spain has found that there is no place in the country, no matter how hard-hit, where herd immunity is within reach. The argument against a “herd immunity” strategy is doubly reinforced by the facts that (1) antibodies may not remain active in the system very long; (2) even if the antibodies retain their potency, it is not known whether they can prevent re-infection. The bad news is that the same arguments also suggest that it can’t yet be determined whether a vaccine will be effective.

Here is more regarding rapidly disappearing antibodies and the herd immunity issue: Memory T-cells for Covid are found after the antibodies have disappeared even in the mild cases. What’s unclear is whether the T-cells prevent someone who is reinfected from spreading the disease. If not, herd immunity is not possible. See here

ADDED 7/8: Turns out karma is real, and it can be a bitch. President Bolsonaro of Brazil Tests Positive for Coronavirus, Gee, I can’t imagine how a thing like this could happen – oh, wait (see below) …

ADDED 7/2: This can’t be good. “The novel coronavirus is showing some signs of mutating in a way that may make it easier for the pathogen to spread”

ADDED 6/26: It’s not a political thing, it’s a health thing. Even uber-conservative Darth Cheney wears a mask, as did his mentor, Darth Vader.

NUMBER OF TIMES PENCE URGED US TO WEAR MASKS: 0

NUMBER OF TIMES PENCE URGED US TO PRAY: 3

Or as Oliver Cromwell told his men, “Don’t bother keeping your powder dry. Just trust in God to stop their bullets.”

UPDATED 6/19: This can’t be good: “The antibodies our bodies develop against COVID-19 can fade away in just two to three months.”

ADDED 6/16: Oxford University scientists determined low-cost steroid, dexamethasone, to be the first drug proven to reduce mortality in severe COVID-19 patients, after a 6,000-patient trial. Note that it is only useful in severe cases. No benefit was found in patients who did not need respiratory support.

ADDED 3/28: The data reveal that covid-19 is much more dangerous for men. The data are consistent from country to country.

On the same day Larry Kudlow said coronavirus was “contained” on Feb. 25th, Trump’s campaign spox made an even more bold claim.

“We will not see diseases like the coronavirus come here..and isn’t it refreshing when contrasting it with the awful presidency of President Obama.” pic.twitter.com/O0DDH3Rvkw