Here is the short cut to the full COVID report for Sunday.

India once again shattered its record for the most new cases in a day, with 275,000. This is now basically a daily occurrence.

On a per capita basis, Turkey had the highest “new cases” rate for the eighth consecutive day.

On a per capita basis, Hungary had the highest fatality rate for the seventh consecutive day.

Among the 21 countries in the world that are in the red zone on both new cases and fatalities, Lebanon has been on that list for the most consecutive days.

You can get misled by the national news. David Muir will open his broadcast with a dramatic tone and a solemn pronouncement like, “COVID fatalities are rising in 20 states, as experts fear a fourth wave.” When delivered in his magnificent, authoritative voice, that is a frightening harbinger of doom. Well, he is factually correct, but that is an odd focus, since it means COVID fatalities are declining in more states than they are increasing)! By stating the facts this way, he presents reasonably positive news as ominously bad news.

The impartial facts are these:

My assumption is that fatalities are declining even while cases move slightly upward because the average age of those infected is dropping, and younger people have a higher survival rate.

It is, of course, a matter of concern that the rate of decline is slowing, and it is true that experts fear a fourth wave. It is also fair to say that we should fear a fourth wave, which is not our certain future, but is (as they say in sci-fi) one of our possible futures. This is true for several reasons, both technical and behavioral:

In other words, don’t fuck around with the Reaper. Wear your masks, keep your distance, get your shots.

“Kyrgyzstan will use a herbal tonic to treat COVID-19, its health minister said on Friday after his president praised the remedy – despite warnings from a medical expert that it contained a potentially lethal poison.”

How do we view ourselves? We like Hawaii and Colorado and we do not much care for Alabama and Mississippi.

Before October 27, 2018, he was a minor. Juvenile records are not available.

In August, 2019 he was charged twice, once for possessing/dealing marijuana, once for disorderly conduct. These are misdemeanors. He pled and was fined.

In November, 2019, he was charged with several counts related to criminal trespass. No further info available at this time.

Wright was charged with aggravated robbery on December 1, 2019 in Osseo, Minnesota. It is alleged that he choked a woman and threatened her at gunpoint for $820. If convicted on this charge, he would face as much as 20 years of incarceration. An arrest warrant was issued, and he was brought in. Wright’s bail was originally set at $100,000 with orders that he should not contact the victim or any witnesses, refrain from drugs and alcohol, and not have any weapons.

In June of 2020, he was charged with unlawful possession of a firearm and fleeing arrest.

Presumably because of the June firearms charge and the report of his probation officer, an arrest warrant for Wright was issued on July 30, 2020 for violating the terms of his bail on the felony robbery charge.

When he failed to make his court appearance on the firearms charge, yet another warrant for his arrest was issued on April 2, 2021. This was still in effect at the time of his fatal encounter with police.

His jury trial for the felony robbery charge was to start on May 24.

The Hennepin County jail records also show that Wright faced some administrative procedure regarding aggravated robbery about two months ago. At the moment, it is not clear precisely what this is about.

We should not attempt to justify his horrifying death, but neither should we misrepresent him or his situation. Because of the warrant(s), the police were correct in trying to bring him into custody, and because both of his recent arrests involved firearms, they were correct to assume that he could be dangerous. And he had every reason to flee, because he was attempting to avoid immediate incarceration that could have lasted as long as twenty years. Of course they completely bungled the situation. Wright was killed unnecessarily and it was fortunate that there were no other fatalities, because a panicking, desperate and fatally wounded Wright managed to plow into another vehicle as he tried to escape.

Anne Beatts was an extremely important comedy voice from my generation, having written for the National Lampoon and the original cast of SNL, and later having created the Square Pegs series.

She also pulled off the nearly impossible task of having had a romantic relationship with the master of dark humor, Michael “Mr. Mike” O’Donoghue, a man about as difficult as any who ever lived. Her humor was almost as dark as his. She infamously created this famous Volkswagen ad, based on VW’s assertion that the bug could float:

That works out to more than $500 per child per day, and it’s apparently a discount based on this sentence: “Kenneth Wolfe, a spokesman for HHS’s Administration for Children and Families, said the average daily cost per child is ‘approximately $775 per day based on past experience.’”

In comparison, I just checked the price of a Sandals all-inclusive 5-star resort in Negril, Jamaica, and it works out to $300 per person per day ($4200 for a couple, 7-nights). So we could transport the kids there, hire each kid a personal nanny at $90 a day (a desirable job with a solid wage in Jamaica), house them in a 5-star resort with unlimited gourmet meals included, and still cut the price in half from that $775 figure. The older kids can even drink booze for free! (Alcohol is also included at Sandals, and Jamaica has no minimum drinking age.)

$60 million per week is three billion dollars per year – and the number of kids is expected to grow dramatically.

Of course I’m not saying that we shouldn’t take care of the kids, but perhaps we need to improve our efficiency.

we could probably build jurassic park if we wanted to. wouldn’t be genetically authentic dinosaurs but 🤷‍♂️. maybe 15 years of breeding + engineering to get super exotic novel species

A letter from the Hanna Family pic.twitter.com/ewuNYa0ReG

(There are even seven extra bedrooms for your staff!)

“Tulsa County Sheriff’s Office deputies arrested 29-year-old Badlands McNally after authorities stopped to talk to him about the plane he was using.”

Hey, Dad McNally, when you named your kid “Badlands,” did you think that he’d become a philosopher or maybe go to dental school? Of course he smuggles Meth. It was either that or pro wrestling.

“Microbes Unknown to Science Discovered on The International Space Station”

Yeah, the headline seems ominous, but the story makes the discovery seem benign.

“Cheese skipper flies, Piophila casei, lay their eggs in cracks that form in cheese, usually fiore sardo, the island’s salty pecorino. Maggots hatch, making their way through the paste, digesting proteins in the process, and transforming the product into a soft creamy cheese. Then the cheesemonger cracks open the top — which is almost untouched by maggots — to scoop out a spoonful of the creamy delicacy. It’s not a moment for the faint-hearted. At this point, the grubs inside begin to writhe frantically.”

On the shore of Lake Ontario in upstate NY, where I grew up, we had a specific word for that kind of condition.

Of course, I’m just fuckin’ witcha, but the truth is that Oswego, NY, once got more than 100 inches of snow in one storm, the Blizzard of 1966, including 50 inches in one day, with winds gusting to 40-50 mph. If I remember correctly, we never lost our power (a miracle), but schools were closed for a week or more, and cars had to drive through canyons called roads. Oswego averages 113 inches per year, so it’s always bad, but that storm was unforgettable to those who lived through it.

Ah, Science, is there no limit to thy wonders?

“Men perceived women with nipple erection as more deserving of altruism, especially if that altruism involved greater interaction with the woman.”

The site has more than a thousand videos, tagged with names, times and locations. Quite an amazing effort.

Here is the short cut to the full COVID report for Friday.

India again shattered its previous record for the most new cases in a single day.

Michigan continued to top every state and every country in the rate of new cases per capita.

Nine months after the pandemic began, birthrates began to fall

Fuck Folgers. THIS is the best part of waking up.

But not as much asado

“His exact cause of death was not disclosed, but Flynt Jr. said his uncle had been in frail health for much of the past 30 years and that his death was not related to Covid-19.”

Van der Veen insists his previous cases are irrelevant to his defense of Trump. (True enough, in principle at least.)

It will now be known as Uncle Remus

The real new name will be The Pearl Milling Company, and the woman’s picture will be replaced by a picture of an old factory that presumably represents said milling company. 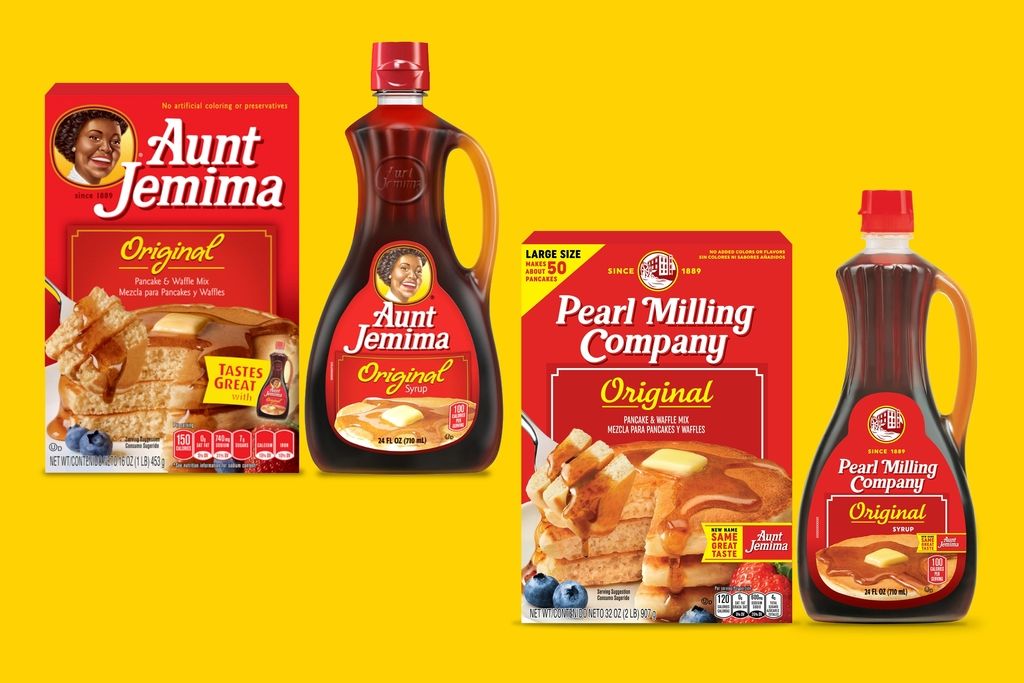 That’s some catchy marketing, right there, obviously appealing to the youngsters, who just love some Industrial Revolution iconography.

But it’s not just for the kids. When I hear the term “Pearl Milling Company,” it just makes my mouth water. That’s the sound of good eatin’!

Hal Holbrook has passed away at 95

Some tourists captured it in real time. Quite a video

Although a handful of other six-star systems have been discovered, this one is unique: It is the first in which the stars within each of those three pairings pass in front of and behind each other, eclipsing the other member of its stellar dance troupe, at least from our space telescope’s line of sight.

In other words, scientists have found a sextuply eclipsing sextuple star system. The discovery, posted online this month, has been accepted for publication in The Astronomical Journal.

Exoplanets within the star cluster have not yet been confirmed, but if you lived on a world within, the night sky would be something special, said Tamás Borkovits, an astronomer at the Baja Astronomical Observatory in Hungary and co-author. Any inhabitants of these worlds, “could see two suns, just like Luke Skywalker on Tatooine,” Dr. Borkovits said, as well as four other very bright stars dancing around the sky.