He’s not exactly the ideal celebrity spokesperson for a drug that makes people speed up. He moves slower than the plot of a Terrence Malick movie. Joe Biden Cocaine makes about as much sense as Nick Cannon Condoms.

As the song goes:

“In a sign of deep vulnerability and of unease among what is supposed to be his political base, only 26 percent of Democratic voters said the party should renominate him in 2024.”

Ross Perot made the mistake of being born too early and having to run against two fairly popular candidates. If he were alive now, he could probably beat these two! Come to think of it, I don’t think there is anything in the Constitution that requires the candidate to be alive.

Speaking of not being alive … I don’t remember how to do actuarial calculations, but I wonder about the odds that both Biden and Trump will be alive in November, 2024. They are both elderly. Biden looks more feeble every day, and Trump is obese. That would be an interesting prop bet for those online gambling sites.

This may not sound so dramatic, but if they pass it as is, the situation could be disastrous for the Democrats in two ways:

1. The Republicans have yet another reason to accuse Biden of being weak and ineffectual because he promised that this bill would be fully funded. Chop a few more points off that sinking approval rating.

2. The bill can’t pass the Senate in that form because Manchin specifically said he won’t add to the deficit. This means that the negotiations and squabbling will begin all over again, with the Democrats continuing to show the nation’s undecided and independent voters that they are just going to keep jabbering about this bill, and can’t get their act together.

He’s still running ahead of Trump, but it’s getting close. 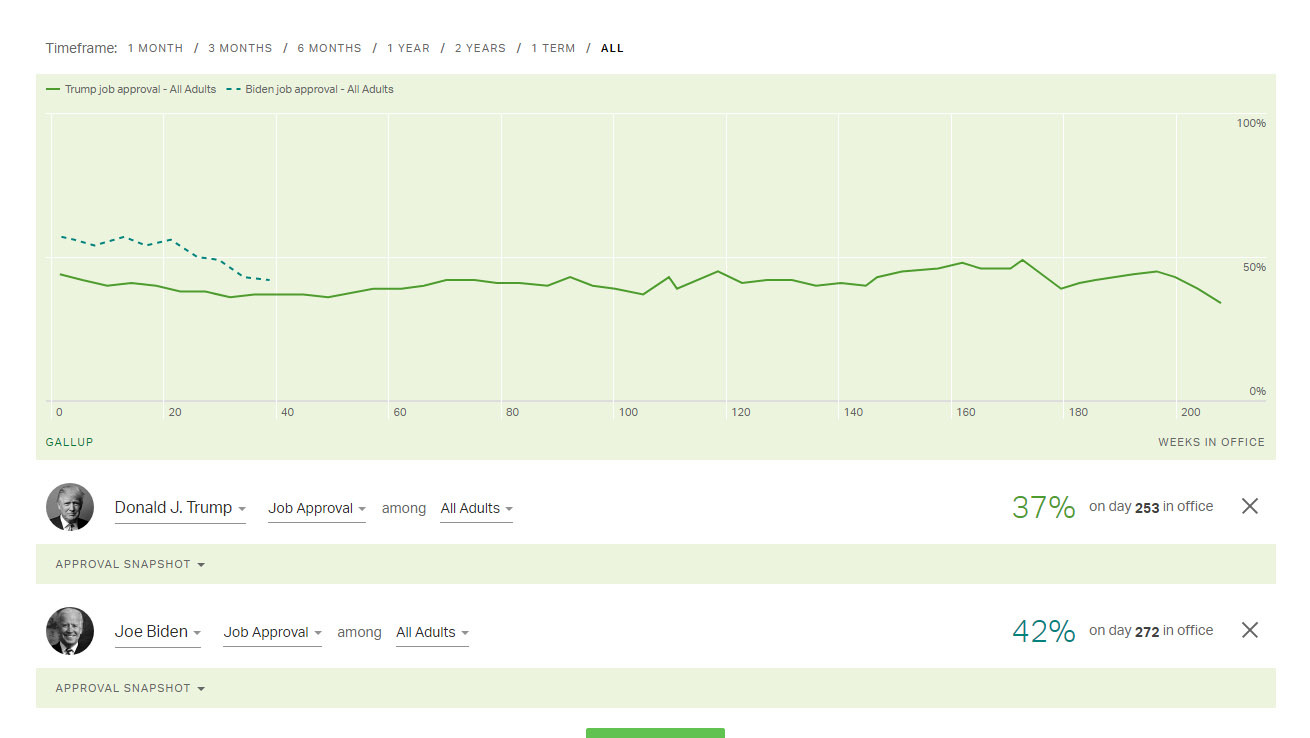 The really telling stat in the new WaPo poll is the percentage of voters who “strongly” approve and disapprove. In late April, 34% “strongly approved” of his performance, while 35% strongly disapproved, simply reflecting the divided nature of our nation. As of now, only 19% strongly approve and a whopping 44% strongly disapprove. His support is disintegrating because those who had given him the benefit of the doubt are disenchanted and deserting.

If you study the numbers, you’ll see that there is still widespread support for his policies. The infrastructure bill has overwhelming approval, and even the framework of the expensive Build Back Better bill is widely popular in theory (58 yea, 37 nay). In short, people seem to like his ideas, but don’t think he’s the guy to pull them off.

The combination of supply chain bottlenecks, inflation and strikes is drowning out any good news he might claim in other arenas. Yes, he has problems at the border and with government gridlock and the botched withdrawal from Afghanistan, but the economy is the big enchilada. Only 29% of adults say they have a positive view of the economy. Biden could single-handedly cure COVID, re-build all of America’s bridges with his bare hands, stop global warming, and get a full-throated endorsement from Jesus in his second coming, but if 70% of Americans view the economy negatively, he’s still in one-term Carter Country.

… just as the speaker says, “This conference is one of the most important meetings in history.”

And it might have been just that, if only America had somebody there to represent it.