She is now the central villainess on Big Sky, but she did some excellent nude scenes about a decade ago.

This is an open matte version that I don’t think I have seen before. The theatrical release mostly cut the scene off at the top of her breasts, but this version includes a lot better look at Malin’s body.

Most of the time I feel she is cute, but not stunning. That is not the case here. She looks gorgeous.

I’ve noticed that a lot of people don’t like her for some reason or another, but there’s no question she is a looker.

The topless shot is from American Pie Presents: The Book of Love (2009) 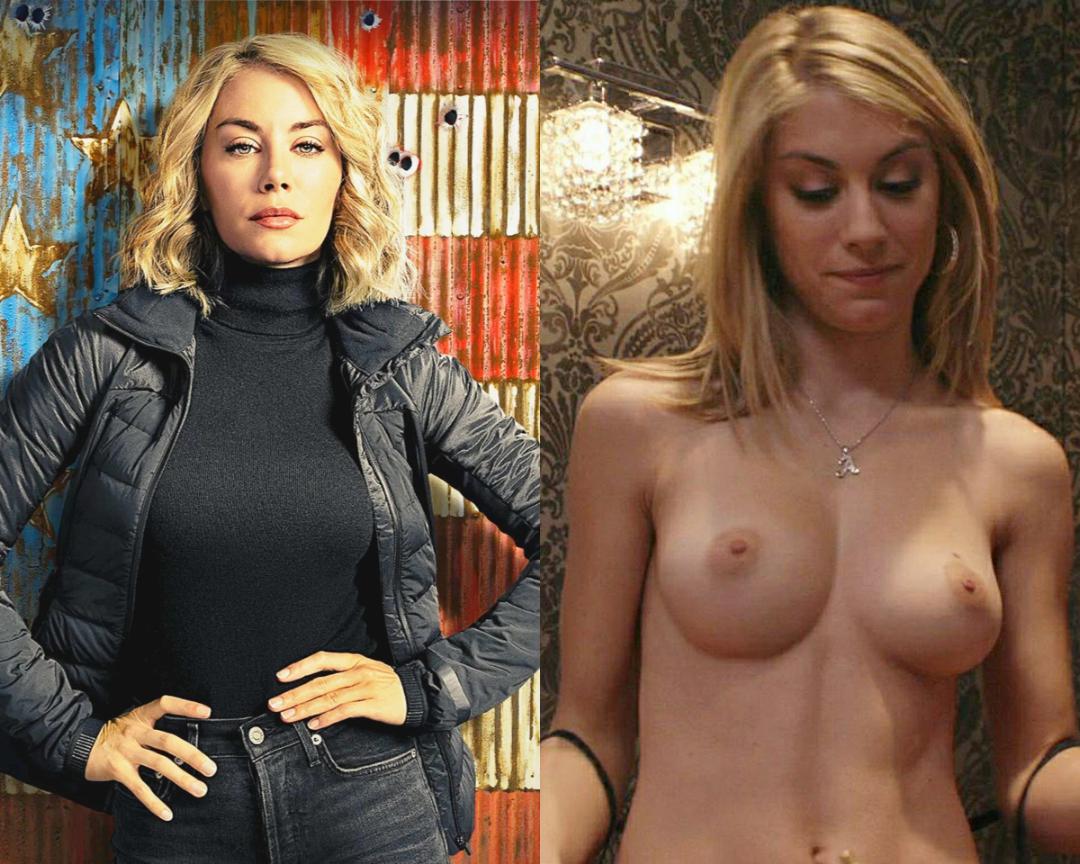 That was the fourth and last (and worst) of the straight-to-vid efforts in the American Pie Presents franchise that came out before American Reunion. Apart from the fact that they purported to tell the story of the Stifler family, those films had only a vague connection to the original series, but they generally featured the same combination of comedy, sentiment and raunchy shenanigans. Eugene Levy continued to play the part of “Jim’s dad,” but he was the only character that appeared in all four theatrical movies and all four spinoffs.

Many years after the first eight films, there was yet another American Pie Presents film called Girls Rules. That one really just trafficked on the American Pie name. There was a character named Stifler, but there was no nudity and they didn’t even hire Eugene Levy. It was also an utterly lame effort (3.8 at IMDb).

Rumor has it that there is another film in the works with the original cast, but the last thing I read was that the only original characters willing to commit were Finch, Vicky (Tara Reid), and the Sherminator. That group wouldn’t add up to much of a movie. I guess it’s still a possibility because none of the originals has a monster career getting in the way, and they are reputedly still a close-knit group. Mena Suvari, Alison Hannigan and Stifler’s mom are always working, but I’m sure they could fit in a few days of shooting.

She was gorgeous in her day, and she stripped totally naked in good light, then rolled around to allow a look from every angle for her role in I, the Jury (1982).

I still think Mickey Spillane stole this idea from my own story, I, The Nuremberg Tribunal, about “a hard-boiled dick who makes hay with the Nazi dames,” then executes them without a trial, because he doesn’t understand any law but the point of a gun, much like Liberty Valance. (And it goes without saying that he also obeys the unwritten law, which is easy to do because nobody can look up exactly what it is, so they have to take your word for it.)

The rare combo of cleavage and underboob leads one to wonder, “What keeps that thing on?”

Sampling local delights, the Duchess of Cambridge swallowed a “the conch’s male genitalia.”

If ever a film deserved to be preserved by the AFI …

As her dad used to say, “WOOOOOOOOOOO!” 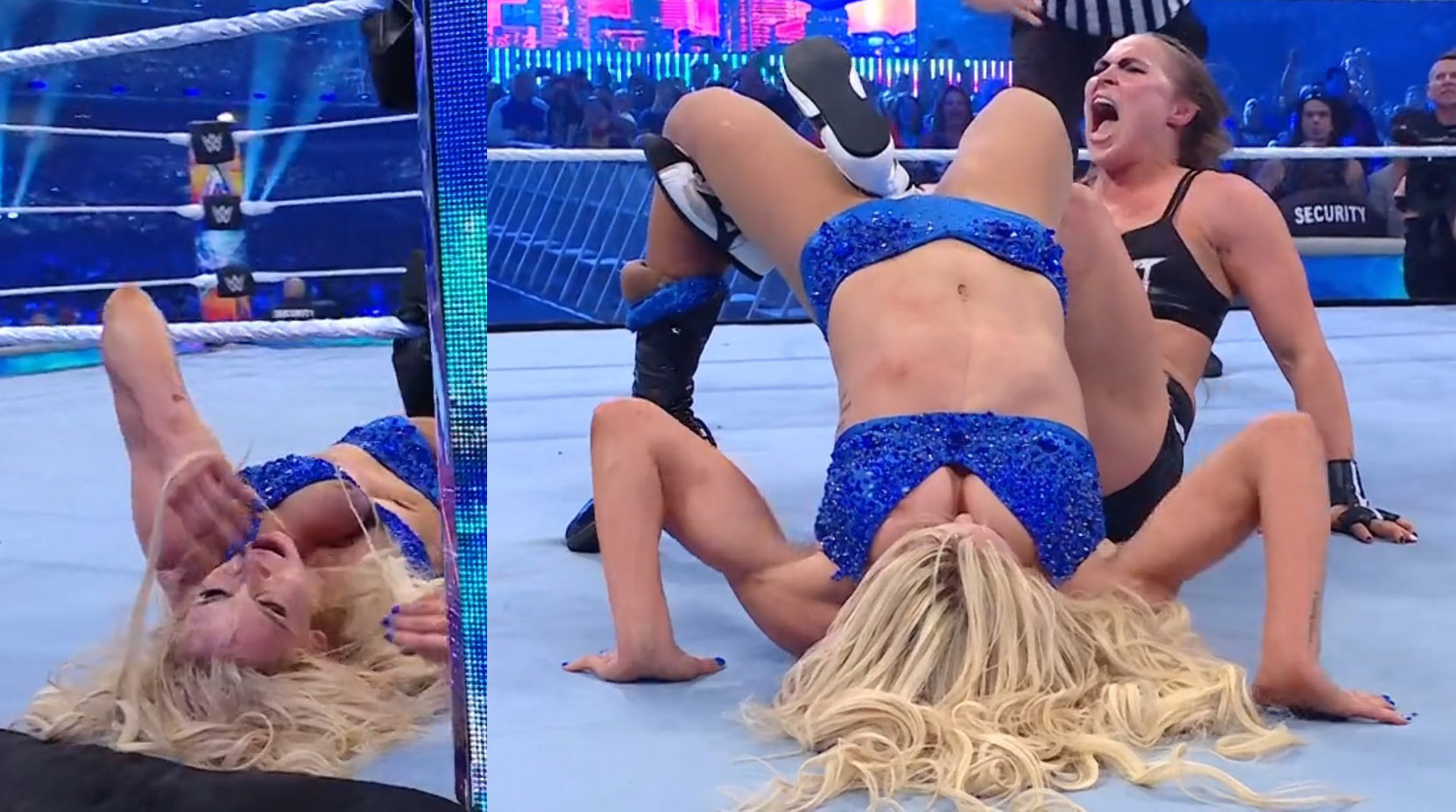 According to the poster, these were taken in Miami in the last two days. Based on these pics, it appears that she can stroll through Miami unrecognized, which surprises me, but is very cool for her. 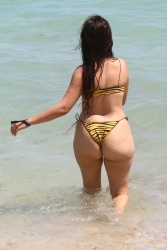 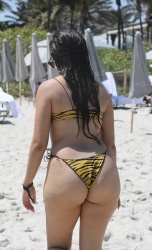 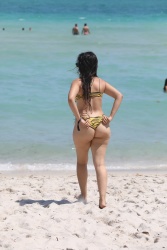 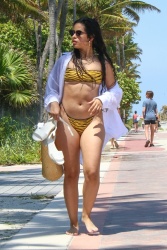 By the way, suck it, Miami. We had snow all morning today, then rain all afternoon. 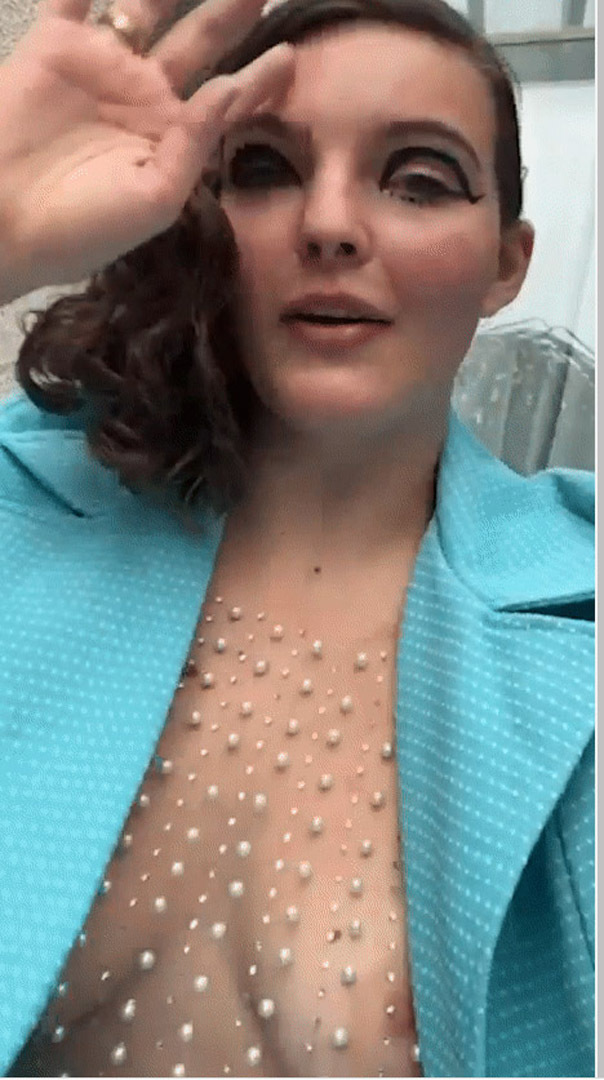 Your gifts from those who just gotta show off.

I’m not sure whether that means she IS rising or CAUSES it.

(AKA “My Friend, The Traitor”)

Beautiful Valerie Kaprisky was a fixture in early 80s cinema, appearing in such famous efforts as Breathless (1982), The Year of the Jellyfish (1984), Aphrodite (1982) and La Femme Publique (1984). All of those films included lengthy Kaprisky nude scenes with substantial exposure. Although I was a big Kaprisky fan and have been researching nude scenes for nearly 30 years, I don’t remember this film at all. It just slipped by me. I must not be the only one who missed it, because it has only 133 votes on IMDb. There is a story to the caps and clips of Maureen O’Sullivan in Tarzan and His Mate (1932). Most comments on the movie deal with the naked swimming scene done by Josephine McKim, who worked as Ms. O’Sullivan’s double in this movie. Turns out that was only one of two scenes with the Olympic champion swimmer as substitute for the lead actress; the second one has Tarzan’s mate, Jane, escaping from a leopard by jumping into a river, where a crocodile the size of Nebraska gives chase. 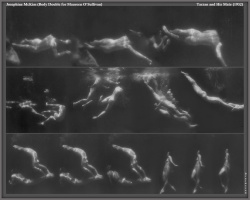 In this scene you can see that even though Jane wears a skimpy outfit throughout the movie she does not go commando. A loin cloth covers her naughty bits.

All of that is relevant because a few online sources and a YouTube video claim that in a late scene, Ms. O’Sullivan unintentionally reveals her garden of infinite bliss as she kneels. To be sure, a couple of earlier scenes are ambiguous, when we get her skirt flies open for a frame or two, but for the one scene in question, as Jane fights off a bunch of hungry lions, it is ever so obvious she wears an undergarment.

But. In that same scene, It looks to me as though she might do a Vivien Leigh and give us a peek at her tasty hoots. Maybe. Perhaps. So, a bad news, good news situation – no accidental exposure of furry bits but there could be a peek worthy of a poke. 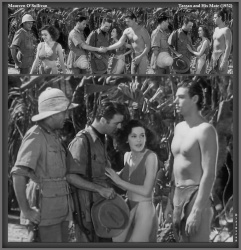 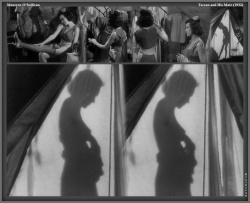 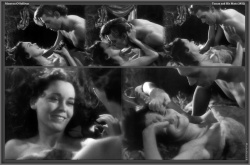 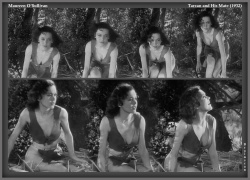 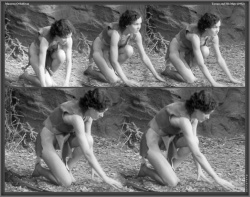 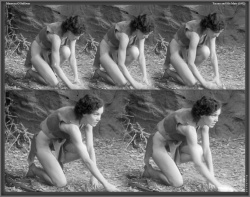 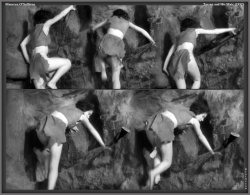 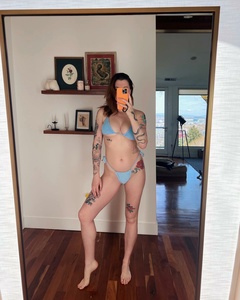 That is quite a full rear.

The guy she just slept with throws her out the door naked. A couple of pervs photograph her from the street, as the good lord intended. 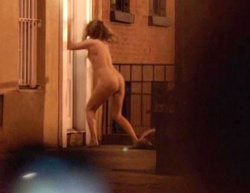 Ivana’s full-frontal in Banshee got her a spot on our Top Nude Scenes of 2013. As mentioned there, she was born in Bosnia, grew up in Michigan. She did some modeling in high school, and got her performing start as a stand-up comedian, talking about her modeling experiences.

She is much older than she looks. She has been in the business 30 years – all as an adult – and made her first film appearance 26 years ago. She turns 48 this month. 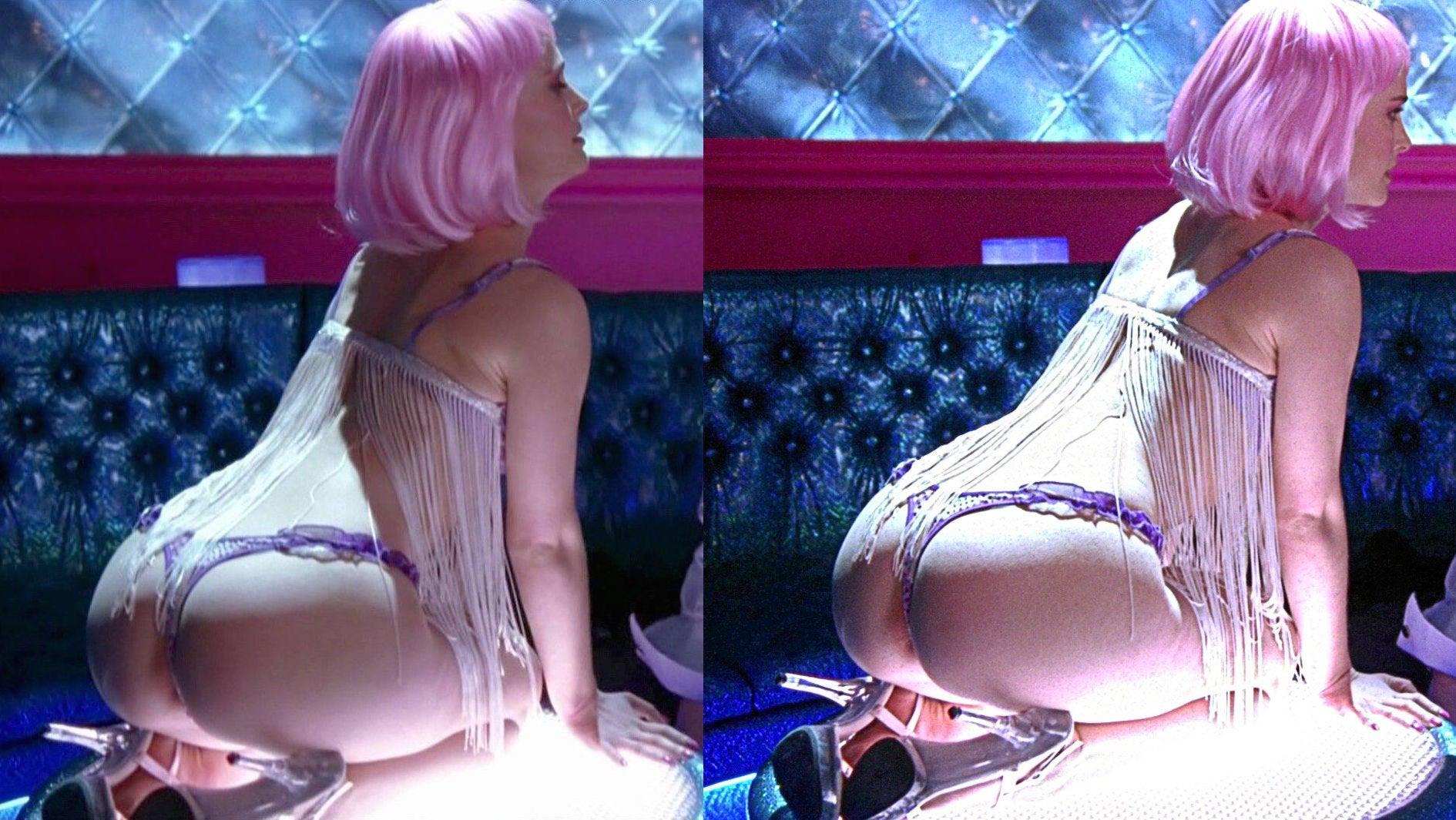 Yes, I admit it. I have become a fan – not of her performing, but of all her free-spirited social media shenanigans. 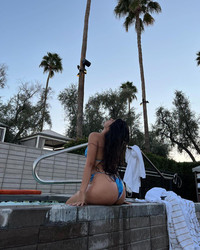 Your answer is here: 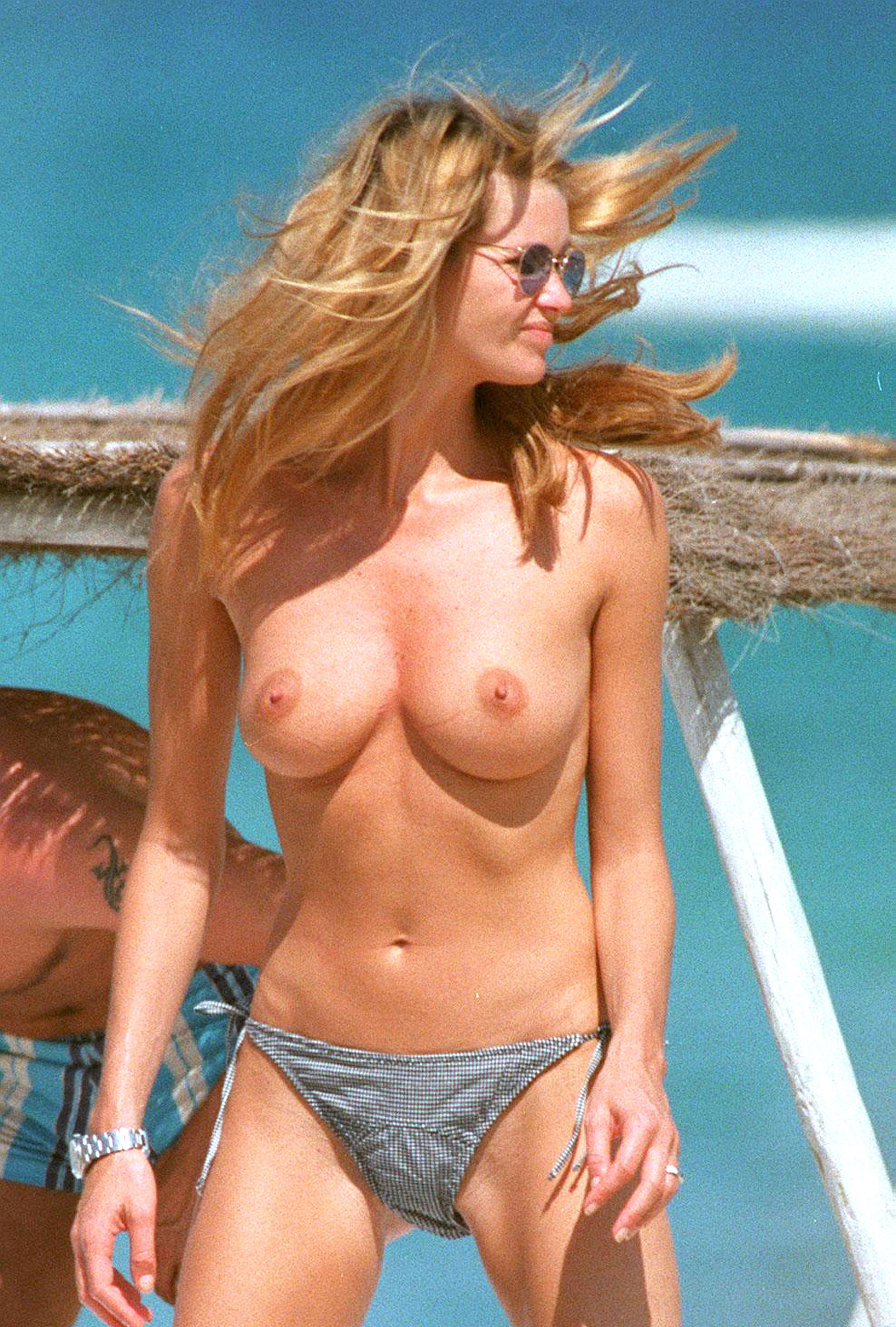