Well, at least they tried to make it work.

“She keeps trying to find love. Seems it has escaped her yet again.”

“I know her best work may have been when she was recreating her MOM’S ICONIC NUDE SHOOT , but these 2020 nipples aren’t bad.”

“If we’ve learned anything, the best way to sell fashion is by posing naked.”

Demons, naked nuns – in short, all the things that make life worth living.

This goes directly to the final scene, but the full video is the full opera.

I’m not too sure what today’s kids are used to seeing, but J-Lo’s Super Bowl act didn’t seem all that family-friendly to me. Either that or families are a lot more fun than back in my day. 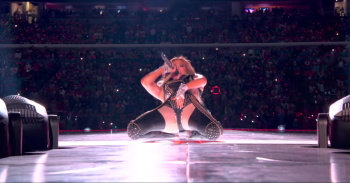 But it’s more ridiculous than sexy.

Of course, The Little Hours (2017) is your only chance to see her breasts, so ridiculous will have to do.

Maya Hawke in a revealing blouse

Expected tonight: wind chill of minus six degrees, plus six inches of snow.

This isn’t some extreme example of “climate change.” That’s just life in Denver!

OK, I have to say it. I can’t help myself. It sounds like a bunch of bullshit.

Unfortunately, the areolae on those giant breasts remained fully covered.

Could have been worse. At least it wasn’t “Seasons in the Sun.”

Lily-Rose at the BAFTAs

This one has a rear view.

She is the model-actress who accused Ryan Phillippe of abuse. (Criminal charges were not filed, civil lawsuits were settled with terms undisclosed.)

Based on the Instagram post below, I’m assuming this large scan came from the same modeling project.

here's a pic of me holding a huge pic of me as da june girl for @playboy 😮🐰🌸thanks to this whole amazing team for supporting me and making this so special. i love u all💘

The main rat, Punxsutawney Phil, did not, which means an early spring, or a late spring, or maybe Ragnarok. I know it’s one of those, but I always forget which one. I suppose our Wisconsin rodents did see their shadows, since we had a beautiful sunny day and 50 degrees. Therefore our spring will be the opposite of whatever Pennsylvania is having.

The Sanders surge seems to have upset the applecart

The two most recent polls (1, 2) indicate that Bernie is the most likely winner, possibly by a substantial margin

Well, I think the most likely winner of that competition is actually Donald Trump.

Which raises an important question: Do any foreign powers have any good dirt on Bernie? “Russia, if you’re listening …”

Let me digress in tone for a second to present a serious point. Trump may change his mind about Russian interference if Bernie gets the nomination. I think there’s a good chance the Russkies may prefer Bernie, on the assumption that he will hurt the American economy. Man, will the Donald be singin’ a different tune if that happens.

A couple of scenes from 1001 Nights that you may not have seen before./

Vica in a whipped cream bikini in an episode of Shameless.

Off topic: I have watched a couple of episodes of Rossumless Shameless this year. Why is that show still on the air? When it comes to jumping, that thing bypassed the shark and went full Knievel on the Grand Canyon.

She posted a picture of herself in a transparent bra.

I’m just kiddin’ around. The booties do not LOOK elderly. They look great, considering that they are attached to women who cast their first presidential vote for “Fightin’ Bob” La Follette.

We’ve seen this before, but I think this version is an upgrade.

Here is another see-thru.

I assume you don’t have internet access, but maybe a tourist will show the pic to you.

There was only one upset I could see, relative to the expected Oscar winners. Greta Gerwig is expected to win the Oscar for Best Adapted Screenplay, but the BAFTA went to Taika Waititi. I would have made the same call. I have not read the book (“Caging Skies”), but it’s obvious that he did an amazing job of creating a heartfelt comedy from a bleak story.

With unintentional irony, Joaquin Phoenix called out the BAFTAs for racism on the same night they gave both screenwriting awards to deserving non-whites. Taika Waititi is a double minority – non-white and Jewish. And as for Bong Joon-ho … well, that doesn’t sound like a Norwegian name to me.

Here is my proposed rule for all the film and TV academies: award winners can make all the woke speeches they want, as long as they are specific. If you think Greta Gerwig should have been nominated as the best director, you have to specify which of the five nominees she should have replaced. Mendes, Phillips and Bong Joon-ho obviously deserve nominations, so if you have the balls to piss off Scorsese or Tarantino, have at it. Same deal if you think Jamie Foxx, Eddie Murphy, Awkwafina or J-Lo should have been nominated. This will show that (1) you have some cojones and (2) that you have actually given the matter some thought and are not just mouthing bromides for the politically correct.

And yes, I would throw out Pacino or Pesci to nominate Jamie (for example). In fact, you can toss them both out and give the fifth nomination to somebody else, of color or otherwise. A decent choice would be either the little kid or Sam Rockwell in JoJo Rabbit, but those are just two that come to mind immediately. You can probably name a dozen people who deserved those nominations more than Pesci and Pacino and there are probably non-whites on your list.

It seems to me that the recipe for inclusiveness in nominations is simply to expand the number of nominees in each category. There is no magic significance to the number five. Make it ten. More people can claim to be Oscar nominees. More films can claim to have earned Oscar nominations. Where is the downside to that?

That thing has gone full Kardashian

Also, I wasn’t aware that her back was so inked-up. There’s flowers, barnyard animals, “Goofus and Gallant” lessons, a full year of Prince Valiant adventures and an exact duplication of the ceiling of the Sistine Chapel. Less ink was used to print War and Peace.

you can watch from your window Some liberal fools thought that our great leader had made an error, but he was quick to shut them down with this press conference.

God bless our President for making me richer today. I won my prop bet on “Which state will the President congratulate if Kansas City wins?” Unfortunately, I didn’t win that much because Kansas was a heavy favorite.

The Super Bowl was the third post-season game they won after trailing by double digits. The Chiefs started the post season by falling behind the Texans 24-0. A Super Bowl victory seemed unlikely at that point, which makes it sweeter now.

All the 2020 Super Bowl commercials are here.