Aly Michalka bares her entire booty on camera. You have to use a little more imagination to see AJ’s. [direct link, alternate link]

‘It Took Me a Bit to Get the Courage to Post’

A beautiful still of Claire Foy in White Heat (2012)

Tough outing for the Mets’ Steven Matz. His line for the day: eight runs allowed (six earned) in NO innings pitched. That’ll kill the ol’ ERA, which went from 1.65 to 4.96!

After those eight batters, a relief pitcher entered, but the Phillies still managed two more doubles and a walk that inning. Final first-inning total: 10 runs produced by 14 plate appearances. JT Realmuto had two doubles and four RBI in that inning, and added a homer in the fifth.

Realmuto is yet another former member of the 2017 Marlins now starring elsewhere, along with Yelich, Stanton and Ozuna. Derek Jeter must have a really long-term plan in mind for his Marlins.

Kailey Hsu is a slim one

It is not an especially percipient reflection on the logic behind the new credits, but the last paragraph is genius:

“So if the opening credits are still supposed to be a window into the upcoming story, that should put at ease the many GOT fans who have become worried that their show will end up being just another epic fantasy about war, dragons, and boobs (instead of a nuanced exploration of politics, morality, and boobs).”

“Trump says he ‘has always liked’ Jimmy Carter. He previously called him the worst president in U.S. history.”

First of all, the WaPo headline implies that those two statements are contradictory. They are not. I like a lot of people that I consider completely incompetent, because their hearts are kind.

Secondly, at the time that Trump said those things they might have been accurate, or at least debatably so. No longer. As Trump noted:

Former President Jimmy Carter is so happy that he is no longer considered the worst President in the history of the United States!

Trump really took off the pressure, so, as he noted, Carter is no longer a candidate for the bottom spot.

“Primates with smaller genitalia compensate by being flashy and aggressive”

So, would they decorate their entire home in gold fixtures and insult everyone?

Emma Rigby is best known from her long-term role on Hollyoaks, although I heard that she had died in the church and was buried along with her name. Maybe that was Cathy Rigby. One of the big Rigbys.

I’m not convinced of this one because the woman looks about 20 years younger than Mireille, but whoever it is, she looks great naked.

Pole vaulters need to be as strong as possible without any extra weight. This really produces some beautiful athletes.

If only the sport itself could be a little livelier.

Wow, this guy is good. Just another day at the factory today – three homers and seven RBI.

He went 0-for-8 in the previous two games, so he took all kinds of extra BP.

Pretty sure it worked.

Here’s something to think about: Yelich seems like the young upstart poised to someday wrest the “best player” crown from the established king, Mike Trout.

Except that Trout and Yelich are the same age! Trout, at 27, already has seven full seasons in the books, none of them less than excellent. The lowest he has ever finished in the MVP balloting was 4th – and that year he led the AL in both
slugging average and on-base percentage.

Of course Trout will make $36 million this year, and Yelich will make $9 million, so Yelich might be the best player per dollar. There must be a Brewer executive who knew Yelich would be that good, despite a 2017 season when he hit only .282 with a mediocre 18 homers. That person, whoever he or she is, is a baseball genius.

The government and the Supremes are jumping through hoops to avoid saying FUCT. My favorite dodge: “The equivalent of the profane past participle form of a well-known word of profanity and perhaps the paradigmatic word of profanity in our language.”

(The case is about the right to register FUCT as a trademark.)

This is one of the most explicit sex scenes in the history of mainstream TV.

I’ll bet he would.

Laughably, he then goes on to say he wasn’t even in the room during the period of time when the non-existent pee tape was shot! (Say, when exactly was that time when it was shot? Just asking so we can check your whereabouts.)

Trump’s latest on the “pee-tape”: He says “I would be very embarrassed if the tape shows up” and then, in the same breath “there is no tape” and “I wasn’t even in the room during that period of time.” 🤔 pic.twitter.com/1elc3XyYm5

I’ve mentioned before that I think the pee tape is probably real. My reason is that Trump asked James Comey to investigate it. If he had done nothing like the suggested action, then he would have been absolutely sure that no tape could have possibly existed, ergo there would have been nothing to investigate. By asking Comey to look into it, he was conceding the possibility that such a thing might exist.

Bret Baier just polled the Bernie Town Hall audience who would be willing to switch to #MedicareForAll. It backfired spectacularly. pic.twitter.com/dQJ9gfQ137

The fire led to the collapse of part of the famed, symbolic spire. No cause has yet been identified.

As Macron so eloquently put it, “This is the place where we have lived all of our great moments, the epicenter of our lives. It is the cathedral of all the French.”

Or as Trump added. “I like landmarks that WEREN’T destroyed.”

The media did a bang-up job on this. CNN produced the stunning gallery linked above, and their photographer caught the spire at the moment it collapsed. 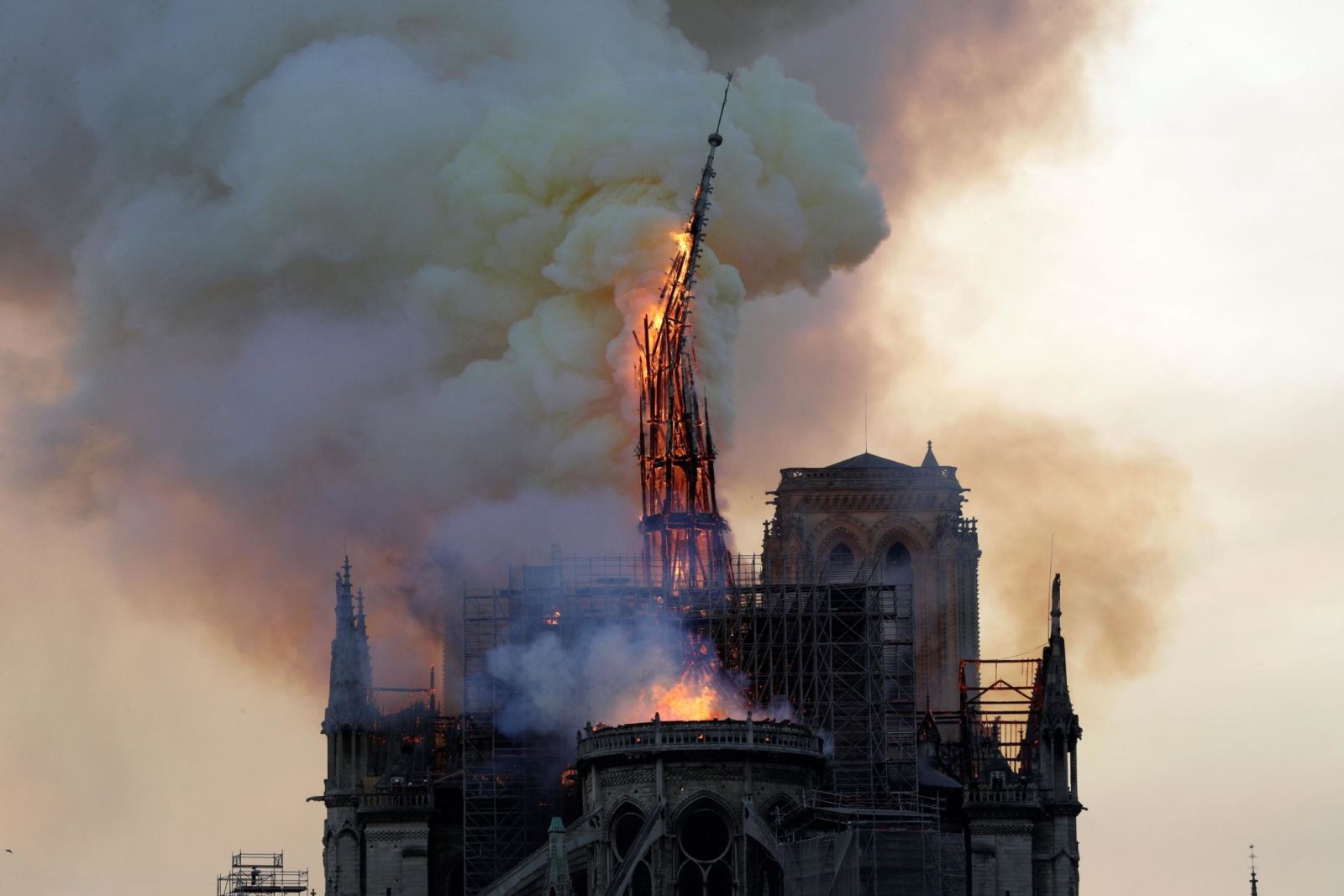 And the Independent caught the moment on video

That Trump – what a funny guy! That shit is hilarious. That’s almost as funny as “Russia, if you’re listening …”

Oh sure, Jonathan Swift and H.L. Mencken were good at political satire in their own times, but that was long ago. Today Trump is the new master!

Emma took it off to join Jeff Goldblum in a crazy romp which was simultaneously a good sex scene and a parody of one.

Miley Cyrus topless, because some things are predictable

Nikki Griffin in an episode of Femme Fatales